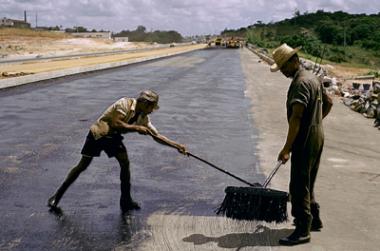 In an effort to support economic growth on the islands, the government of Cabo Verde sought to upgrade road infrastructure but only had experience with two-year road rehabilitation and maintenance performance-based contracts (PBCs)—not longer-term ones. The World Bank funded an exchange for Cabo Verdean officials to learn from Brazil’s experience with PCBs and implement best practices in road building and contract management.

In an effort to support economic growth and social activities on the islands, the government of Cabo Verde wanted to upgrade infrastructure, such as road building and rehabilitation, but did not have experience with long-term performance-based contracts (PCBs), which can help lower costs and ensure proper road maintenance year-round.

The Cabo Verde Transport Sector Strategy, 2008-2020, articulates a vision for rehabilitating and maintaining the core road network and constructing missing links to increase rural access. Toward this end, the government introduced PBCs on four of the nine inhabited islands of Cabo Verde, namely those with a mountainous landscape where roads are expensive to build and rehabilitate and more vulnerable to landslides and flash-floods. However, these PCBs were short-term and covered only routine maintenance and emergencies. Government officials wanted to understand how to implement full-fledged PBCs.

The exchange was designed to improve Cabo Verde’s Road Institute’s capacity to prepare and monitor more complex, full-fledged PBCs that would give the contractor responsibility for rehabilitation and maintenance over four years or longer. The TTL knew that Brazil had experience with these PCBs and that Brazil had previously hosted a knowledge exchange on the subject with Vietnam. Also, as Portuguese is the national language of both Cabo Verde and Brazil, communication barriers would be minimal.

The program was a true exchange—first, six policy makers and technicians from Cabo Verde’s Roads Institute, Road Fund and Road Sector Support Program traveled to Brazil for a weeklong Study Tour. Later, representatives from Brazil traveled to Cabo Verde to visit road sites, work with the Road Institute on the bidding documents, including the draft contracts, and educate engineers and consultants on the concept of PBCs and on the bidding process.

During the Study Tour in Brazil, delegates visited Brasilia for discussions with federal-level counterparts at the Ministries of Finance, Planning and Transport, where they learned about international best practices and identified areas for road maintenance strategy improvement. They then visited with officials Salvador, Bahia—giving them both state and federal government perspectives. The trip to the state of Bahia also included site visits to current Bank-funded PBC road works projects employing the CREMA delivery method.

During the Workshop in Praia, Cape Verde, four Brazilian road engineers with extensive experience in managing PBCs shared their knowledge with the Roads Institute engineers in charge of preparing and overseeing the bidding documents and contracts for PBCs and participated in a seminar to introduce local road contractors and supervision consultants to PBCs and help prepare them for the bid process. The Brazilian delegates then conducted site visits to advise the Roads Institute engineers in their monthly compliance inspections of the roads already under PBCs in Cape Verde in order to optimize their contract management skills.

The exchange helped with the following:

Brazil is well-equipped to provide future knowledge exchanges. Since the exchange, nearly 70 percent of all roads in Cabo Verde are managed under PBCs (approximately 40 percent is covered by IDA-financed PBCs).

Bank staff brokered this exchange using a grant of US$41,000 from the South-South Experience Exchange Facility (SEETF) to fund the travel and accommodations of participants. Approximately 70 percent (US$29,005) was expended.

The Cape Verdean officials who visited Brazil and Salvador included:

The knowledge providers in Brazil included: