Shelter for the Urban Poor in the Philippines: Building Capacity to Develop and Implement Inclusive and Effective Large-Scale Solutions 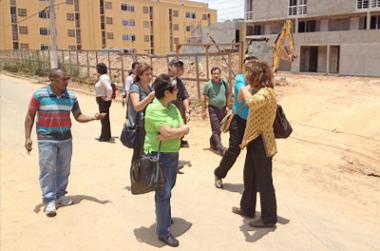 To develop a national framework for providing housing and shelter options for the marginalized urban poor, officials from the Philippines engaged in an exchange with Brazil. They learned how to develop subsidy and incentive programs to engage a wide cross-section of public and private stakeholders, developing their own National Informal Settlements Upgrading Strategy.

The government of the Philippines sought to improve living conditions in its urban areas and to provide decent shelter for its poor, marginalized citizens as part of its larger agenda to achieve sustainable growth and development. The Philippines enacted several major policy initiatives, including the President’s Social Contract with the Filipino People, the Philippines Development Plan 2011-16. Also, it committed PhP 50 billion (US$1.2 billion) to provide shelter for informal settlers living in danger zones in Metro Manila during 2011-16. These efforts were designed to address challenges such as low levels of public investment, absence of a sustainable housing policy, weak political commitment to carrying out large-scale slum upgrading initiatives, and high-income real estate market concentration.

Despite policy progress, the Filipino government still lacked the knowledge and capacity to develop and implement sustainable policies, and to coordinate interventions for low-income housing and slum upgrading in the country’s major urban areas.

The Philippines requested World Bank support for an exchange with Brazil to learn from its coordinated efforts in incorporating urban housing in its national development strategy and to promote inclusive, effective, and sustainable approaches to low-income shelter.

Filipino participants came from national and local government, including housing authorities, led by the Housing and Urban Development Coordinating Council. Brazilian knowledge providers were officials of the Cities, Finance, and Planning and Budget ministries as well as municipal and local housing agencies. The exchange included:

The exchange increased participant knowledge and skills, particularly in policy development, by

The exchange was financed by the South-South Knowledge Exchange Facility. In addition, a World Bank team also facilitated the post-exchange peer-to-peer sharing and roundtable activities that helped to put the knowledge gained from the study visit into a practical, usable context for the Filipino participants.

Providing knowledge during this exchange were representatives of the following Brazilian agencies and NGOs:

“The study visit to Brazil was an eye opener for most of the participants. The strong political commitment of the Brazilian Government, the substantial investment made in the sector, and the participatory process leading towards the formulation and adjustment of key policies and programs have been a source of inspiration for the Philippine delegation.” – Program report

Lessons gained from the exchange have already led to the successful development of the National Informal Settlements Upgrading Strategy, and have contributed to the design of the subsidy scheme for the Php 50 billion shelter program for informal settlement families living in danger areas. This is expected to have positive impacts on socializing the importance of housing reform for the overall Filipino economic and social development agenda. Brazilian counterparts that met with the Filipino representatives, and particularly CAIXA Econômica Federal, were keen to formulate longer term technical support to the Philippines on its housing reform and redevelopment agenda.

From the Philippines, the following institutions were represented:

“The Knowledge Exchange has provided concrete examples and best practices as well as ground validation of the impact of having an effective strategy for informal settlements upgrading. The Brazil experience proved useful and contributory to determining approaches and possible directions relative to coming up with the Philippine strategy for national Informal settlement upgrading.” – Participant