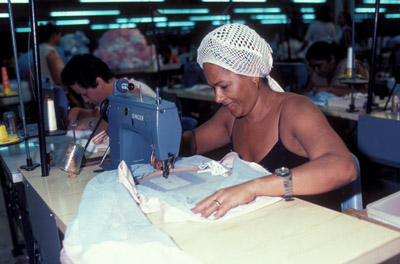 Haiti’s garment industry, responsible for 88 percent of Haitian exports,1 received a crippling blow from the January 12, 2010 earthquake. The Government of Haiti (GOH) gave a high priority to the sector, which is the country’s largest employer, and wanted to attract investment to revitalize exports and create jobs. Through the World Bank’s ongoing Hemispheric Opportunity through Partnership Encouragement (HOPE) project,2 the GOH approached the Bank to facilitate a knowledge exchange with Brazil and Korea, well known for the competitiveness of their garment sectors.

In addition to reinforcing the government’s commitment to policy changes and staff training, the Haitians learned about policies and strategies to strengthen competitiveness, introduce the Haitian garment sector into international supply chains, and increase garment exports.

The garment manufacturing sector—Haiti’s single largest exporter and employer—benefited from the Haitian Hemispheric Opportunity through Partnership Encouragement (HOPE) Acts I and II, which were part of the Caribbean Basin Economic Recovery Act (CBERA) of 1983. The HOPE Acts granted preferential trade benefits to Haitian apparel to support the garment sector and improve Haiti’s economy.

After the earthquake that hit Haiti in January 2010 destroyed most of the country’s physical infrastructure, the Government of Haiti (GOH) began making plans to resuscitate and upgrade the country’s garment industry. The GOH approached the World Bank staff overseeing the HOPE program to help Haiti learn about the successful garment sector strategies used by Brazil and Korea that had made them globally competitive.

The World Bank then facilitated a knowledge exchange for officials from Haiti’s HOPE Commission, Ministry of Finance, Ministry of Commerce, Ministry of Labor and Social Affairs, and Customs Department to visit Korea and Brazil to learn about policies and strategies to strengthen trade policies and competitiveness and increase exports by the Haitian garment sector.

The Haitian government was able to apply what it had learned in this exchange to strengthen competitiveness and increase exports and jobs in other sectors.

The knowledge from this exchange informed ongoing World Bank operations in Haiti, supporting the country’s development goals. For example, the Bank worked closely with the HOPE Commission to deliver technical assistance on strengthening linkages between Haiti and the neighboring Dominican Republic.

The exchange also led Brazil to engage with the U.S. government to expand the HOPE Act II so that both Brazil and Haiti could receive duty-free benefits. The overall reduction of duties could also help Haiti’s economy.