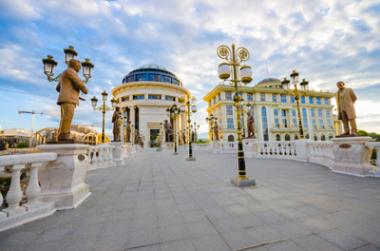 Macedonia sought to develop and implement an Open Government Plan as part of its effort for government transparency, as well as to meet EU online service requirements. The exchange helped to raise awareness and understanding of the e-Government agenda among Macedonian officials and helped to establish data sets in each ministry appropriate for e-Services.

Macedonia has invested heavily in communication and technology development in recent years, particularly in the area of e-Government. Its National Strategy for e-Government, 2010-2012, targeted the creation of a wide range of e-Services, largely to help meet EU requirements for online service delivery. Macedonia has successfully launched a variety of e-Services, including e-Tax for firms, export/import licensing, cargo transport licenses, electronic land registry, and e-Procurement. However, the move toward open government was hindered by a lack of citizen engagement and demand and by low awareness in e-Services, and subsequent investment in, by policymakers. Brazil and Moldova were chosen for the exchange based on their experience with the Open Government and Innovation Economy ecosystems and related reform agenda. Objectives for the exchange were to build awareness and capacity to implement e-Government, address deficiencies in policies and standards, teach officials how to engage with citizens online, and create a roadmap to implementation.

The knowledge exchange followed on the heels of the World Bank-hosted global dialogue, “Opening Up Development: How Can Countries Start and Run Data Ecosystems?” in December 2011. Among the 10 participating countries were Macedonia and Moldova. In February 2012, a core group of policymakers from Macedonia and Moldova met via videoconferencing to develop an action plan to submit to the Open Government Partnership (OGP). An online community of practice for open government in Macedonia was also established.

Two delegates from Macedonia, Irena Bojadzievska from Ministry of Information Society and Administration and her colleague from Ministry of Foreign Affairs attended the OGP Annual Meeting in Brazil (OGP chair) in April 2012. Following the meeting, the two Macedonia delegates joined a study visit with key counterparts from Brazil, Tunisia, and Moldova; and a few international experts. The study visit included meetings and presentations on e-Government strategies; Open Public Software; the e-Democracia Portal, which allows citizens to participate in the legislative process; Lexml, a searchable index of legal bills and documents; Siga, an Open Budget Portal that permits crossings of databases; the Transparency Portal, which publishes data on the executive branch; and e-Voting.

To follow up, the Government of Macedonia held Open Data Knowledge Sharing workshops in Skopje in October 2012. The Minister of Information Society and Administration invited World Bank representatives to ministerial meetings to brief the Ministers of Health, Education, Transport, and Communication on the value of open data and how to manage political risk. In due course, the Government held a public seminar on “Achieving Benefits from Open Data” to boost demand for e-Services, and hosted a workshop and clinic on open data attended by 70 representatives from various sectors. Stakeholders in Macedonia also held a videoconference with Moldovan officials and experts to share experiences and encourage ongoing knowledge exchange.

[OGP was launched in 2011 to provide an international platform for domestic reformers committed to making their governments more open, accountable, and responsive to citizens.  Since then, OGP has grown from 8 countries to the 65 participating countries.  In all of these countries, government and civil society are working together to develop and implement ambitious open government reforms. Opengovernmentpartnership.org]

Although reluctant and reserved at the beginning, the Macedonian ministers who met with World Bank delegates at the October (2012) meeting ended up suggesting datasets to be opened. The ministers appointed contact persons from their ministries to work with the Ministry of Information Society and Administration.

The World Bank designed the customized knowledge exchange program, funded visits by two Macedonian to Brazil, convened the knowledge exchanges, and provided experts for Open Government and Open Data workshops. Total expenditure was US$48090.24 plus related staff time and travel.

Moldova:
e-Government Center, created with the support of the World Bank and in charge of implementing the e-Transformation and Open Government agenda across sectors

Macedonia:
Ministry of Information Society and Administration, the office in charge of Macedonia’s OGP.

Augusto Herrmann, Time de Dados Abertos, INDA, wrote: “[The knowledge exchange] reinforced the need to register and systematize the knowledge about how to design and implement open data policies, which had so far been a result of experimentation despite the existence of a few international technical and advocacy guides (such as the Open Data Handbook). But in regards to planning and managing open data projects in public administration, it was all tacit knowledge we had obtained in an ad hoc basis of practicing it. Since then, we've written down our own Toolkit for Open Data (http://kit.dados.gov.br), intended for Brazilian public institutions, both in federal and local levels. Since it's on GITHUB (https://github.com/dadosgovbr/kit), it's been independently reused by someone, apparently in Jamaica. We also do recommend the World Bank's Open Government Data Toolkit, even though we haven't had the chance to use it ourselves.”