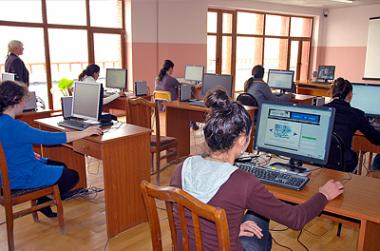 A fundamental prerequisite for successfully growing an economy today is affordable, efficient, and widespread access to Internet services. But many countries are still in the process of creating the necessary foundations for transitioning to an information society. One of  them is the Kyrgyz Republic that, nevertheless, aims for offering full-scale access to the Internet in all populated parts of the country by 2017.

The Kyrgyz Government is well aware of the importance of a vibrant telecommunications market and has actively promoted the spread of broadband. To help the Government reach its goal of providing full-scale Internet access by 2017, the World Bank has been assisting in preparing a draft strategy for developing broadband access. To further understand the technical and institutional requirements for developing the broadband Internet market, the Kyrgyz Ministry of Transportation and Communications had expressed interest in exchanging experiences with countries in Eastern Europe. Many of these countries had successfully developed and implemented broadband strategies that created conditions for efficient compe­tition, quality improvement, and a multitude of service offerings. With financial support from the South-South Experience Facility, a knowledge exchange between the Kyrgyz Republic and Croatia was organized in 2015.

Having access to best-practice approaches was critical for the Kyrgyz Ministry of Transportation and Communications to be able to implement the National Broadband Strategy, which has a focus on competitive market development, international connectivity, and cross-sector infrastructure sharing. The knowledge exchange therefore needed to focus on measures critical for developing policies and regulations in four key areas relevant to market development: (a) improving international and domestic Internet-backbone connectivity; (b) developing appropriate, competition-promoting regulations; (c) improving management of radio spectrum; and (d) defining the role of the public sector in a competitive market. The knowledge exchange was designed to provide the Ministry of Transport and Communications with a roadmap to create an enabling environment (e.g., legal and regulatory framework, competition promotion) that fosters private and competitive development of the sector (e.g., licensing, spectrum management) and positions the country to have better global connectivity.

The exchange was planned with a mix of activities, including a study tour, videoconferences, and a twinning arrangement. Prior to the study tour, videoconferences were held to help identify and frame the relevant issues, highlight priorities for knowledge providers to focus on, and introduce the participants from both sides and familiarize them with the topics to be covered. The study tour had originally been scheduled for September 2014, but took place in March 2015. The Kyrgyzstan delegation had 8 members representing the Kyrgyz Parlia­ment, Ministry of Transport and Communications, State Communication Agency, Kyrgyz Telecom, and Association of Communication Operators. In Croatia, meetings and field visits were organized with the Ministry of Maritime Affairs, Transport and Infrastructure, Croatian Post and Electronic Communication Agency, Ministry of Public Administration, and private sector representatives. The twinning arrangement component of the exchange could not be accomplished, however, due to political volatility in the Kyrgyz Republic.

The completed parts of the knowledge exchange were a success. The delegation was exposed to the successful ongoing information and technology projects in Croatia, which provided useful insights and hands-on knowledge of policy development, regulatory design, and implementation methods. But as mentioned, the delay of the study tour and failure of twinning arrangements to materialize raised some important lessons to bear in mind for the future.

Organizing the study tour took extra time due to delays in securing the formal agreement of the hosting agency in spite of earlier informal agreements that had been reached. In the future, therefore, it would be useful to secure such formal approvals in parallel with the application process, for instance, by using a "pending funding" contingent approach.

The impact of the exchange would most likely have been much deeper had the political uncertainties in the Kyrgyz Republic not prevented the Kyrgyz counterparts from hosting the twinning component. As such, unforeseen situations do occur, making it advisable in the planning phase of an exchange to consider alternative arrangements for delivering the twinning component by, for instance, videoconferencing. Overall, the use of videoconferencing should be under­scored having been extremely useful in this exchange. The videoconferences enabled both sides to learn more about how to frame their questions and presentations. They helped both sides better understand the country contexts, allowing information to be presented in an effective and proper way and resulting in an effective learning process.

The knowledge exchange confirmed that a program of this kind is well suited for replication for two reasons. First, there is an obvious need for knowledge exchange on issues related to strategies for broadband Internet market development. Second, rather than just looking at experiences of high-income countries, which are usually held up as models, there is a clear need for providing practical and relevant examples to developing countries from other emerging economies. So for a similar activity, it might be useful to consider tapping the possibly overlooked resources of other knowledge-providing countries such as Thailand, Turkey, and Sri Lanka.

Knowledge exchange is a power­ful instrument. It allows officials in resource-constrained countries, such as the Kyrgyz Re­public, to gain knowledge and in­sights from experts in other count­ries. However, for future exchanges, it would be useful to consider an accelerated model that could leverage technology to a greater extent, while working around some of the political realities in the client country as opposed to high-impact, but also more formal methods such as a twin­ning program.

The main outcome of the exchange was a better understanding overall among the partici­pants of the requirements for successful reforms and the possibilities for developing the infor­mation and technology sector in the Kyrgyz Republic. Even though obstacles remain, the partici­pants were convinced that the exchange played an important role in creating a stronger sense of direction and collaboration among the participants and their respective agencies, which is needed for a successful planning and implementation process going forward.

As an output from this visit, the Kyrgyzstan delegation began to develop an action plan based on the lessons learned and experience received from Croatia. The exchange also helped to further the poli­cy dialogue on the telecommunications sector reform agenda, which is one of the key issues being addressed in the World Bank's development policy operation for the Kyrgyz Republic. Through an in-depth policy dialogue, the World Bank is following up with the sector's regulatory agency to sustain the gains achieved in capacity building through the knowledge exchange.

On the whole, the exchange resulted in a positive outlook, which will be helpful in the policy dia­logue for creating the right conditions for affordable, efficient, and widespread access to Internet services in the Kyrgyz Republic.