Building Capacity to Develop and Manage Roads in Lao PDR 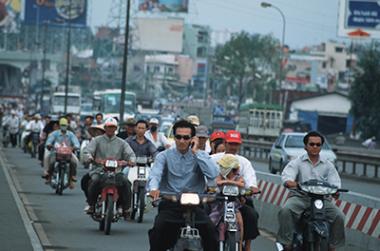 Lao PDR sought to modernize its road network to facilitate trade, stimulate economic growth, and ensure regional integration. Since 2000, the Laotian Ministry of Public Works and Transport (MPWT) has worked with partners to develop and implement improvements in building, managing, and maintaining roads. In 2010, Laotian officials developed the Bank-financed Road Sector Project (LRSP), which finances national and provincial corridors and provides technical assistance (TA) to the MPWT.

To complement the LRSP and build Laotian road officials’ capacity, the World Bank organized a workshop in Vientiane in October 2011, focusing mainly on governance, procurement, and financial management. Officials identified skills gaps in road administration, road asset management, and public-private partnerships (PPPs). They also realized they needed to enhance buy-in on ways to strategically manage the sector amid a decentralization program.

Tapping their global experiences, Bank transport specialists proposed a study tour to South Africa. Laotian officials could learn from its innovative approaches, including involving the private sector, to managing, operating, and maintaining its vast road network. Through this exchange, Laotian officials sought to build their technical skills, deepen consensus among officials on new directions, and identify next steps.

Key agencies sharing their experiences were the South African National Roads Agency (SANRAL), which manages over 19,000 kilometers of roads using concessional contracts and tolls, the Department of Transport and Roads in Gauteng Province, and South Africa's Council of Scientific and Industrial Research (CSIR). The Laotian delegates included the Minister of the MPWT, four Provincial Governors, the Director General of the Department of Planning and Cooperation, and the Director of Vientiane Department of Public Works and Transport. The exchange had three phases:

The exchange increased the capacity of Laotian officials to strategically manage the sector and develop and maintain roads in three key areas:

In addition, the exchange strengthened consensus among MPWT managers on a path to reform. After the visit, MPWT prepared a pilot PPP road project, laid the groundwork for strengthening road asset management, and provided trainings on road planning and contract management at central and local levels.

World Bank specialists, including those engaged in the Laos Road Sector Project, leveraged their contacts and project experiences to broker and design this exchange. Bank staff from CMUs and Country Offices provided additional support, such as coordinating with counterparts in the Laotian Ministry of Transport and SANRAL, participating in the preparatory videoconference, giving advice to the Bank Task Team on hiring a local consultant to facilitate the exchange program, and preparing the program.  The exchange was largely funded by the South-South Facility, with co-financing from LRSP.

The Department of Transport and Roads in Gauteng provides road infrastructure and integrated transport services in the Province.

Therefore, the MPWT invited the CEO of SANRAL to Lao PDR for a week in February 2014. Officials shared lessons on road asset management and PPPs with the Ministry of Finance, Ministry of Planning, Provincial Governments, and MPWT departments. The CEO visited Vientiane and Borikhamxay provinces and advised their Governors.

The Bank also mobilized resources from the Public-Private Infrastructure Advisory Facility for a PPP feasibility study, which recommended a PPP pilot for two sections of the No. 13 National Road.

The Laotian delegates included high-level officials with roles in developing and implementing policies and programs in the roads sector. Each had influence over the direction of reform and follow-up activities.

The following Bank staff also participated in the exchange: