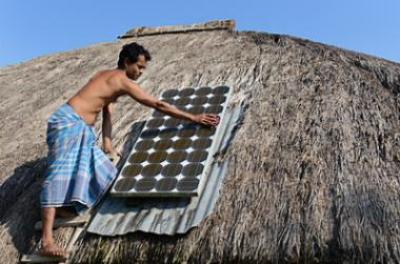 In 2011, Thailand was at a crossroads in climate-friendly development, preparing for Nationally Appropriate Mitigation Action to reduce greenhouse gas (GHG) emissions as part of its obligation to the United Nations Framework Convention on Climate Change while simultaneously addressing national development goals of reducing GHG emissions, improving energy efficiency, and promoting economic development. The Government put forth efforts to propose relevant policy schemes but still required practical guidance on how to develop large-scale, renewable and efficient energy and how to catalyze the private sector. The Thailand Greenhouse Gas Management Organization (TGO), an agency for GHG emission reduction under the Thai Ministry of Natural Resources and Environment, needed to develop relationships and tools necessary to demonstrate the technical and commercial viability of renewable energy and energy efficiency projects and lower technological and financial risks for all stakeholders.

As the key connector of institutions working on low-carbon development goals, the Government of Thailand recognized its need and sought a knowledge exchange to gain that necessary learning experience. India has been a demonstrable leader in developing reducing emissions and improving energy efficiency on a considerable scale. The Government of India’s Central Electricity Regulatory Commission and Bureau of Energy Efficiency have developed cutting-edge renewable energy certificates (REC) and energy saving certificates (ESC) that drive private–public collaboration and advance low-carbon development goals.

The face-to-face meetings of a multi-phase exchange took place in New Delhi, India, on September 5 and 6, 2011. Convening with knowledge providers from India's public and private sectors, 16 government participants from Thailand, Kenya, and the Philippines had discussion sessions on topics such as design of renewable energy and energy saving certificates; bidding methods; and roles of government and the private sector. They also heard presentations on case studies and in sector-specific sessions. Participants met with industry representatives in informal networking receptions. Following this exchange, delegates attended the Carbon Conclave, India's flagship event in the carbon market space. Over 50 high-level speakers in 8 plenary and 4 parallel sessions shared knowledge on current trends and emerging scenarios of the global and Indian carbon markets.

Following the person-to-person exchange, the World Bank facilitated two follow-up videoconferences between TGO officials and the Indian counterparts at Central Electricity Regulatory Commission and Bureau of Energy Efficiency. One videoconference was on renewable energy certificates and the other on energy saving certificates.  Both videoconferences were recorded and translated into Thai for further dissemination among local technical staff working on these issues.

There were no lessons learnt from this Exchange.

Thailand was awarded a Public Sector Reform Development Policy Loan (DPL) of US$1 billion from the World Bank, with low-carbon policy development and investment playing a significant part. There has been active coordination with ADB and JICA due to their provision of parallel financing.  The ADB has been providing technical advice in the area of capital market development, and the ADB Board approved a US$300 million budget support operation. The Thai Government has also requested ADB to provide US$300 million in new investment projects. In addition, JICA has been asked for US$300 million for climate change support and two new investment projects worth US$140 million.

Both these videoconferences were recorded and translated into Thai for further dissemination among the technical staff working on these issues but not conversant in English. The TGO had a conversation with the Thai Government on how to include the private sector into this discussion in Thailand as well as to discuss ideas on how such a scheme can be operationalized by the different agencies in Thailand.

The delegation from Thailand attending face-to-face meetings include the following:

The providers from India included: