Learning about Community-Driven Development to Rebuild Housing in Haiti 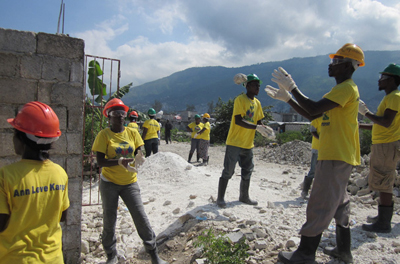 The earthquake that hit Haiti on January 12, 2010 resulted in a massive loss of lives and a complete breakdown of Haiti’s housing infrastructure. The government of Haiti had been unable to invest in long-term reconstruction given its immediate needs for emergency housing. It asked the World Bank for help in learning about community-based reconstruction measures. The World Bank facilitated a South-South Knowledge Exchange with Indonesia because of that country’s experience with community-driven development (CDD) in its post-tsunami and post-earthquake reconstruction. Haitian policymakers and technical experts involved in reconstruction traveled to Indonesia to see post-disaster CDD reconstruction initiatives in practice.

On a study tour to various disaster sites, the Haitian delegation learned about response methods and the planning and implementation of CDD housing programs, including how to identify beneficiaries and how to train local communities to carry out reconstruction projects. Most important, the experience motivated the Haitian policymakers to try CDD approaches and empower local communities to help themselves.

“The Haitian delegation learned about tackling mistrust in government,” said Mathurin Gbetibouo, Lead Agriculture Specialist in the World Bank’s Latin America and Caribbean Region (LCSAR). “This exchange was a fine example of empowering members of a community that surely can be replicated in Haiti with some changes.”

This exchange led to a blueprint to guide Haiti’s housing reconstruction, which is now being implemented by community teams. Learning from this exchange has also informed the World Bank’s Haiti Urban Housing Reconstruction CDD pilot project in Port-au-Prince. Additionally, several months after the exchange, the Haitians established the Interim Haiti Recovery Commission (IHRC), modeled after a similar institution in Indonesia, to monitor the reconstruction.

The earthquake that struck Haiti on January 12, 2010 left most of the country’s housing infrastructure in shambles. In the immediate aftermath of the quake, the Haitian government strove to provide emergency and temporary shelters, but was unable to focus adequate attention on long-term housing.

Haiti also faced land tenure issues because properties were completely razed and destruction of communities because of citizen displacement. As Haitian officials considered plans for reconstruction, they decided that the best option was to invest in housing approaches that encouraged strong community participation. With the help of the World Bank, the Haitian government identified Indonesia as a partner because of its successful and transparent community-based approaches in housing reconstruction that Indonesia had implemented after the 2004 tsunami in Aceh and the 2006 earthquake in the Yogyakarta area.

The World Bank brokered a knowledge exchange for officials from Haiti’s Ministry of Planning and Ministry of Interior---as well as other policymakers, engineers, reconstruction experts, and representatives from nongovernmental agencies---to travel to Indonesia. The Haitian authorities met with Indonesian public officials, community members, and representatives from international organizations to learn about disaster responses, and how to design and implement community-based housing reconstruction initiatives.