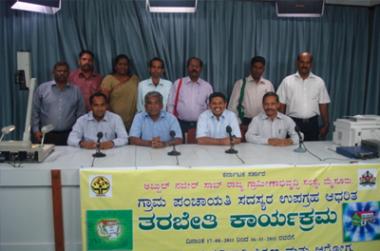 With support of a Bank project, Sri Lankan officials sought to strengthen local governments’ capacity to provide roads, schools, and other infrastructure, and to involve citizens in development planning and programs. Through exchanges with counterparts in the Indian provinces of Kerala and Karnataka, officials enhanced their skills in local government management and participatory approaches to development.

To improve the welfare of Sri Lankan citizens, in May 2010 the World Bank approved the North East Local Services Project (NELSIP), which aims to strengthen the capacity of Local Authorities (LAs) to provide infrastructure – from roads to schools to sanitation facilities – in two Sri Lankan provinces. The NELSIP supports the transparent and accountable delivery of infrastructure services in post-conflict areas, including through citizen engagement in development planning and programs.

Sri Lanka's provincial governments did not have the capacity to manage local government programs.  The LAs and village (gram) and divisional (block) panchayats – local government units – in these provinces lacked the technical skills to involve their citizens in creating, executing, and monitoring development initiatives. As this capacity gap jeopardized NELSIP’s success, the Bank and its clients discussed how to provide relevant know-how, possibly over a long period given these provinces’ multiple challenges.

The Indian provinces of Kerala and Karnataka had used participatory methods to improve local government services, and Bank staff involved with NELSIP proposed that Sri Lanka learn from their provincial and local governments. Sri Lankan authorities harnessed funding from the South-South Facility, as Sri Lanka had restrictions on the use of donor loan proceeds for exchanges.

Both Indian provinces had rich histories in this area. In 1996, Kerala embarked on a "People's Planning Campaign," which involves citizens in designing, implementing, and monitoring development programs. Since 2006, Karnataka has supported the World Bank-financed Panchayat Raj Strengthening Project, increasing the capacity of local agencies and citizens in development.

The Bank first organized two videoconferences (VCs) to introduce parties and devise a learning agenda for an initial study tour to India. The Sri Lankan participants in this visit included senior officials from the Northern and Eastern provinces, secretaries of local governments, personnel from local government agencies, and staff from NELSIP.

In November 2011 the delegates went to India, where they engaged in workshops with officials from provincial and local governments, the Kerala Institute of Local Administration (KILA), and the State Institute of Rural Development (SIRD) in Karnataka. They learned about decentralization programs, the functions of local governments, and strategies for engaging citizens in development planning and programs. They also visited gram panchayats and block panchayats to learn about innovative community engagement methods. The success of this visit led to two follow-up visits financed by the South-South Facility in June 2012 and December 2013. These trips focused on ways to strengthen local government management and to address the needs of the disabled.

After the visits, delegates organized debriefing sessions and other activities to share lessons learned with provincial and local governments and Sri Lankan stakeholders.

The exchange program built the capacity of the provincial and local governments in northern and eastern Sri Lanka to provide infrastructure services.  The program helped to:

Owing to these visits, the Bank Task Team for the NELSIP project saw an improvement in project implementation, such as in preparing local authority development plans, social accountability committees, and grievance mechanisms. Some local authorities also indicated they would incorporate insights on addressing the needs of the disabled into the planning processes.

Bank staff engaged with NELSIP leveraged their global contacts and project work in India to broker this exchange and finance it with a grant from the South-South Facility.  Some funding also came from NELSIP.

In addition, the Institute of Social Sciences in New Delhi provided valuable support in organizing the exchange and carrying out logistical tasks.

Nonetheless, this exchange was a key to increasing the confidence of officials from the Northern and Eastern Provinces to improve local governance as Sri Lanka emerged from a 30-year conflict.