Improving Capacity for Migration Management in Europe and Central Asia 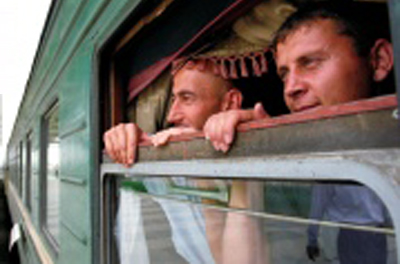 Every year, approximately 10 million migrant workers from the lower-income Commonwealth of Independent States (CIS) head to Russia and other middle-income CIS countries to seek employment and provide a livelihood for their families.1 Many migrant laborers remit funds to their home countries to support their extended families.

Migration in the countries of the World Bank’s Eastern Europe and Central Asia (ECA) region creates challenges and opportunities for both the sending and receiving countries. For many net-emigration countries, remittances have a large positive effect on household income and long-term national economic growth. Migrants are also exposed to new environments and have the opportunity to learn new skills, which can often result in increased cross-border trade and investment linkages. Although migration trends in ECA have changed over the past decade, migration policies and strategies have not kept up with the new dimensions of labor mobility.

In Tajikistan, where remittances have contributed significantly to economic growth, there was growing concern about how the looming global financial crisis and economic slowdown might affect Tajik laborers in Russia and Kazakhstan and the amount of money they sent home.  The Tajik authorities decided to explore ways of cushioning the country’s economy from a possible large-scale return of migrants and the associated decline in remittance flows. In response, the World Bank facilitated a series of knowledge exchanges for government officials from Russia, Tajikistan, Kyrgyz Republic and Armenia with officials from the Philippines.

These included regional policy dialogues within the CIS on regional migration issues, and sought to improve labor migration management in the CIS.

For the past decade, labor migration has been a central issue in the ECA Region as countries try to integrate into the world economy following the dissolution of the Soviet economic network.  Every year, approximately 10 million migrant workers from the lower-income Commonwealth of Independent States (CIS) head to Russia and other middle-income CIS countries in search of employment and a livelihood for their families.2 A significant number of the migrant laborers remit funds to their home countries to support their extended families.  In many ECA countries, remittances are a major source of investment funds and represent a large percentage of their gross domestic products (GDPs). In 2004, officially recorded remittances to the ECA region totaled over US$19 billion, or 8 percent of the global total of remittances (US$232.3 billion), and over 12 percent of the total remittances received by developing countries (US$ 160.4 billion).3 In Tajikistan, for example, remittances flowing from Tajik migrants working in Russia and Kazakhstan have fueled economic growth and poverty reduction since 2002.

Countries like Tajikistan, who benefit from the remittances of their citizens working abroad in other ECA countries, were particularly concerned about how the global economic crisis might affect migration policies and migrant laborers in ECA.  The World Bank helped organize a knowledge exchange to help Tajik authorities and officials from other interested CIS countries understand the migration policies and strategies of Russia and the Philippines.  The knowledge exchanges also provided technical support in preparing for National Labor migration strategies for Tajikistan and the Kyrgyz Republic.