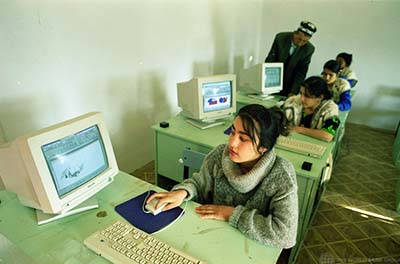 The Government of Tajikistan aimed to develop a more transparent, accountable, and cost-effective government through the use of information and communications technologies (ICT) and turned to the World Bank’s South-South Facility for help.  India, Moldova, and Georgia were well on their way in developing their e-government systems and processes, so the Bank brokered a knowledge exchange between the three countries and Tajikistan.
The knowledge exchange used a mix of instruments, including roundtables, videoconferences, expert visits, and study tours. Ultimately, the grant achieved its formal development objectives: enhancing the awareness of Tajik government officials on the transformational power of ICT and promoting consensus on ways to implement e-government in Tajikistan. Three visits to India, Moldova, and Georgia to study e-government issues, along with follow-up roundtables, contributed to Tajik government officials’ increased understanding of e-government’s benefits and how best to implement it. The grant also contributed to the adoption of the E-Government Concept, which outlines the government vision on e-development, e-government institutional arrangements, main e-government services, and the ways those services should be delivered.

The Government of Tajikistan aimed to develop transparency, accountability, and cost-effectiveness through information and communication technologies (ICT). To achieve this, it needed to enhance the development capacity of, and increase the operational efficiency and cooperation among, different government agencies. Therefore, building capacity in ICT and e-government programs, strengthening stakeholder ownership, and fostering effective teamwork were critical for reaching the larger goal.

There is a strong push coming from the Tajikistan leadership, including the President, to bring ICT use in the public sector to a new level, overcoming its fragmented and uncoordinated management and adopting best international practices. This agenda is reflected, in particular, in the recent initiative to strengthen the mandate and intensify the work of the IT Council under the President.
The exchange was in line with these efforts. It complemented and reinforced the ICT-related activities under two World Bank supported projects, as well as a number of other government- and donor-financed ICT projects in the public sector. The strong synergies with the political priorities and existing ICT projects, and a direct relevance for broader governance reforms, indicate the sustainability and impact of the project.