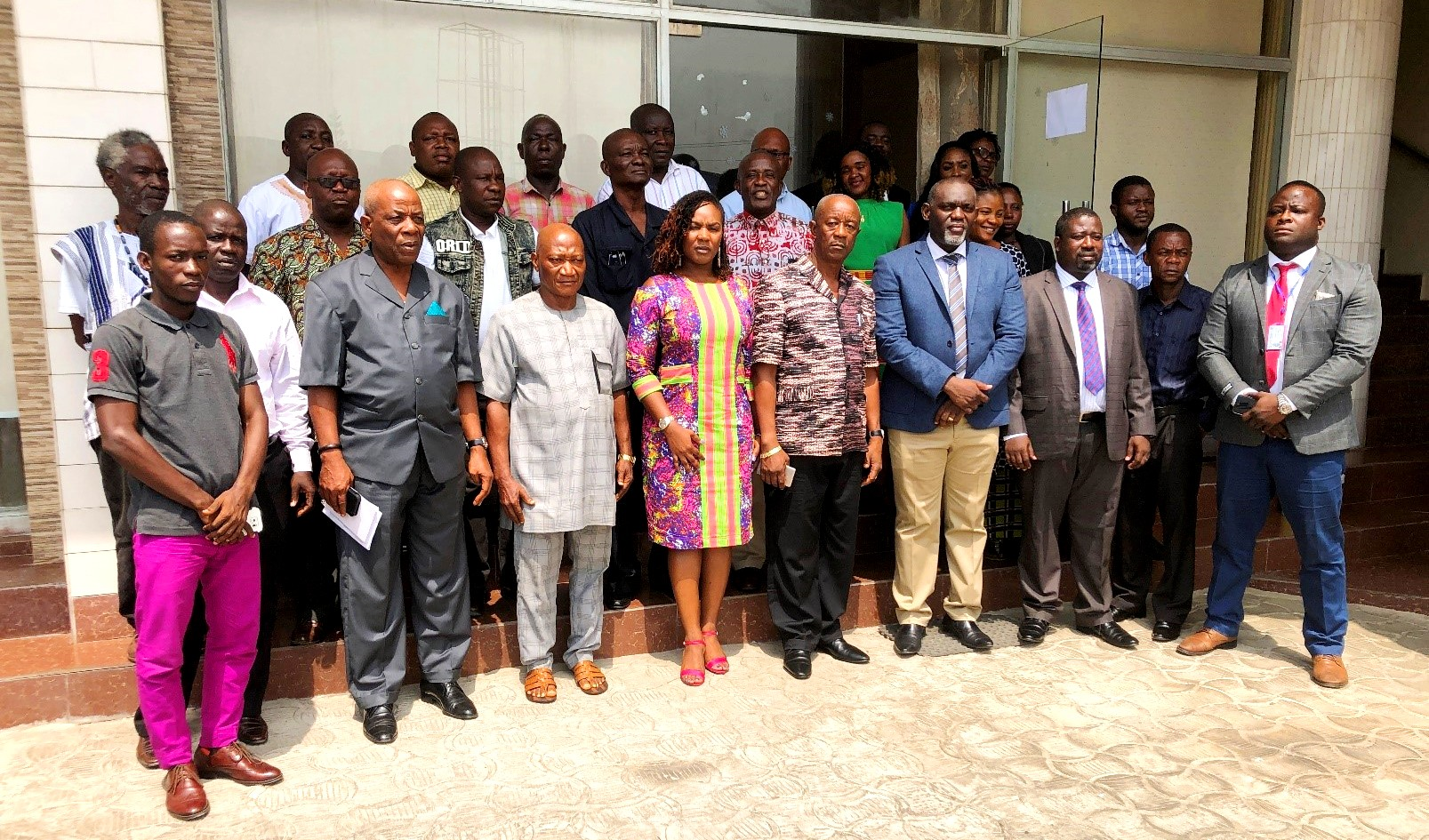 Liberia is at a critical stage in its peace building and development process, given the multiple challenges the country is facing. One of the key challenges is insecure tenure and the absence of a functioning land administration system. Secure tenure is a prerequisite for increased productivity, dispute resolution, strengthened business environment, women’s empowerment, and revenue generation. The Government of Liberia has recognized the importance of secure tenure and has established the Liberia Land Authority (LLA) in 2016 and passed the Land Rights Act (LRA) in 2018. Since 2018, the World Bank is funding the Liberia Land Administration Project (LLAP), which seeks to build the LLA’s institutional capacity and establish a land administration system. Capacity constraints are amongst the key challenges of the LLA to fulfill its mandate, to implement the LRA, and to implement the activities under the LLAP. To assist the LLA with tackling these challenges, the World Bank’s South-South Facility has funded a knowledge exchange with Rwanda through a study tour as well as a 3-day workshop on the land administration reform experiences in Ghana.

Liberia faces unique land tenure challenges mainly related to its specific historical and political context. Liberia was founded by former slaves coming from the United States who attempted to create a Western statutory system of land ownership. The majority of the rural population however use customary systems, which are based on community or collective ownership of discrete territories. Amongst the key concerns is that more than 50 percent of the country is covered by land concessions, which often overlap with other private and customary rights. This may be a significant driver for new rounds of conflict. Also, while Liberia’s statutory laws protect women’s land rights, they often are not able to exercise their rights due to social norms related to marriage and other family relationships. In global comparison, Liberia ranks place 174 out of 190 countries in the 2019 Doing Business report with regard to registering property. The fragile land tenure situation in Liberia is made more insecure by contradictory natural resource policies, an unclear legal framework and low professional and technical capacity in core land administration and land management disciplines such as customary land rights management, land use planning, and land dispute resolution. Currently, there is no cadaster and no effective and reliable land information system in Liberia and capacities in this area are low. While the LLA is receiving financial and technical support through the LLAP, the project is LLA’s first World Bank-funded project and therefore capacities with regard to implementing such a project are low.

The proposed solution was to facilitate knowledge exchanges with other African countries that have made significant progress with regard to similar challenges. First, Rwanda was selected as a knowledge provider as Rwanda has implemented a land tenure regularization program that resulted in the systematic registration of all land in the country. Land dispute resolution was part of the process and local mediation committees (‘Abunzi’) play an important role to resolve land related disputes. Further, the country’s land use planning system is well advanced in rural as well as in urban areas. The second knowledge provider was Ghana. The establishment of customary land secretariats and land use planning systems as well as the establishment of a land information system in Ghana were identified as important areas for knowledge exchange. Also, Ghana’s land administration reforms were funded by the World Bank and this experience was identified as highly relevant for the LLA to implement the LLAP.

The knowledge from Rwanda was shared through a study tour of key LLA staff. Workshops with different government departments were organized, focusing on land dispute resolution, systematic land registration, land use planning, and land information systems. The study tour included field trips to allow the participants to witness the implementation of land administration reforms at the local level.

The knowledge exchange with Ghana was organized through a 3-day workshop in Monrovia, Liberia, which allowed LLA staff to learn from the Ghanaian experience. The workshop included presentations from staff in the Ghanaian Ministry of Lands and Natural Resources as well as staff from the WB-funded Ghana Land Administration Project. The workshop allowed for open discussions and side meetings on customary land rights management, land use planning, land information systems, and management of a WB-funded project.

The LLA prepared reports for the study tour and workshop. Based on the reports, LLA identified numerous lessons learned. The below represents an extract of key lessons learned:

The training on the Ghanaian experience in Liberia was attended by 39 LLA staff from all LLA departments (Land Administration; Land Use & Management; Policy & Planning; Administrative and Customer Services) as well as 5 LLAP PIU staff. The participants were comprised of all four Commissioners (including the acting Chairperson); four Technical Directors; the Executive Director; and 25 technical staff.

A World Bank task team led by Linus Pott (Land Administration Specialist), with support from Victoria Stanley (Senior Land Administration Specialist) and Gabriela Itzel Nunez (Consultant) facilitated the study tour to Rwanda and organized the Ghana workshop, both of which were funded by a grant ($25,000) from the South-South Facility. The World Bank-financed Liberia Land Administration Project funded the participation of additional LLA staff for the Rwanda study tour. The World Bank’s Task Team Leader for the LLA participated in the Rwanda study tour (through another funding source) to provide additional technical input.

LLA will continue to exchange with its peers from Ghana and Rwanda. Study tour reports were prepared by LLA and shared with the respective knowledge providers. The World Bank agreed to provide access to its facilities for follow-up videoconferences as needed. Generally, the option of organizing videoconferences with other knowledge providers from within and outside the region is being considered.

Management staff and technical officers from the LLA highly appreciated the knowledge exchanges with Rwanda and Ghana. Specifically, LLA staff appreciated the opportunity to witness the most prominent example of successful first-time registration in Rwanda and the experiences from a similar WB-funded land administration project in Ghana.

Hon. Ellen Pratt, LLA Commissioner for Land Use & Management, summarized the study tour to Rwanda as follows:
“The study tour to Rwanda was very inspirational but also informative. Why? Because we saw firsthand an example of a post-conflict country, with many of the same scenarios and characteristics as Liberia. Rwanda bounced back as a country with very clear objectives of how they wanted their country to grow and specifically how they wanted land reform to be achieved within a feasible timeline. So, what I took from Rwanda was that we need to have a clear vision, we need to have a clear plan, and we need to be willing to make sacrifices and hard choices. Rwanda did not do business as usual because they needed a paradigm shift of the way they were operating, and I think these are very pertinent lessons that Liberia can learn as we look at a serious change in our land reform agenda.”

With regard to the Ghana workshop, Julius Kamara, Policy Analyst at LLA’s Policy & Planning Department stated:
“I participated in the 3-day knowledge exchange / training session with the experts from Ghana. The training was very successful, and it contributed to LLA’s knowledge on raising awareness, decentralization, and building the rightful regulations to implement the new Land Rights Law to give everybody equal access to land.”

New knowledge on systematic registration of customary land
New knowledge was gained on systematic registration of customary land rights. The study tour to Rwanda demonstrated the need for political will, participatory development of laws and policy, piloting to test different approaches, inclusion of local communities in carrying out the activities, rigorous awareness raising to ensure participation of communities and subsequent registration of transactions, necessity to employ fit-for-purpose technologies and surveying standards, and the importance of capacity building at all levels. The fundamentals of establishing a geodetic network and Continuously Operating Reference Stations (CORS) were discussed as well. The importance of ensuring that international companies installing CORS stations transfer knowledge to the respective counterparts was highlighted as being key for success in Rwanda. Further, the complexity, duration, and cost implications of developing a digital Land Information System were discussed. The Rwanda and Ghana experiences showed that such systems require detailed planning, constant upgrading, and major financial resources. The Liberian delegation observed the application of such a system at the central and local levels in Rwanda and learned about different options for providing user access to such a system, e.g. through an intranet or web-based solution. Also, the participants learned about the need for ensuring maintenance and sustainability of a Land Information System as all subsequent land transactions need to be registered in the system to avoid that the information becomes outdated. Incentives for registering land transactions and related benefits must be clearly communicated to landowners. Further, accessibility of services must be ensured and the example of the establishment of Customary Land Secretariats in Ghana was discussed as a model, which resonates with provisions under the LRA, calling for Community Land Development and Management Committees. Also, the use of mobile buses offering land related services in Rwanda was witnessed during a ‘land week’ campaign, which brings services to the citizens.

New knowledge on management of World Bank-funded projects
Regarding the management of World Bank-funded projects, a diverse set of knowledge was obtained from the experiences of Ghana. The coordination with other development partner-funded projects was highlighted to avoid duplication of efforts. Further, the need for internal coordination and clearly defined communication flows was highlighted. In addition, the approach of using workshops for the development of work plans, procurement plans, and review of project documents was recommended. The general need for all relevant staff to be briefed on project objectives and the respective roles and responsibilities of staff was identified as fundamental. Specifically, the collaboration between the LLA and the Project Implementation Unit (PIU) was discussed, and it was highlighted that the two should not be seen as separate entities as the LLAP is a Government project. The issue of hiring of external consultants for tasks under the LLAP was subject of discussion and the Ghanaian experts advised that consultants are not supposed to replace existing capacity but build LLA’s capacity.

REVISION OF ACTIVITIES UNDER THE LIBERIA LAND ADMINISTRATION PROJECT

The knowledge exchange helped LLA to reframe existing activities and include new activities under the LLAP. This entails for example the inclusion of a pilot for systematic registration of customary land; the development of regulations regarding customary land registration; and development of a National Zoning Policy. These activities were not part of the LLAP prior to the knowledge exchanges and the study tour and the workshop have led to conversations between the LLA and the World Bank to inform these new activities. Further activities might be included under the LLAP based on subsequent discussions, e.g. related to communication and awareness raising; fit-for-purpose surveying technologies; or the discussion on a deeds-versus a title-based registry system.

The activities were led by the World Bank in close collaboration with the LLA. The participation of additional LLA staff in the study tour and workshop was facilitated through providing additional LLAP funds.

The Rwanda Cooperation Initiative has the mandate to facilitate study tours and facilitated contacts with different Government departments. The partners in Rwanda included the Rwanda Land Management and Use Authority (under the Ministry of Natural Resources) and its different departments at the central and local level; the Secretariat in charge of coordinating activities of Mediation (under the Ministry of Justice); and the City of Kigali.