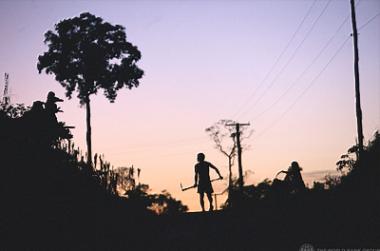 To promote efficiency and transparency in Indonesia’s power transmission and distribution system, senior officials and core technical staff in Indonesia’s power sector sought to exchange ideas with their Brazilian counterparts on conditions for and benefits of adopting smart grid technologies, understanding how smart grid applications work for utility companies, and gaining practical experience to plan and implement smart grid programs.

By the end of 2010, Indonesia’s per capita electricity consumption and electrification ratio ranked lowest among the World Bank’s larger, developing member countries in East Asia. More exploitation of renewable energy resources, expansion of efficient transmission and distribution systems, and capacity building in demand-side management were required for meeting the growing demand for electricity accompanying economic growth and also for reducing greenhouse gas emissions.

However, there existed deficiencies in policies, standards, and other incentives meant to guide the pursuit of these needs. The performance of PT Perusahaan Listrik Negara (PT PLN) Persero, the state-owned power utility monopoly, was perceived as weak and lacking incentives because it received a huge subsidy from the government. Staff in the Ministry of Energy and Mineral Resources (MEMR) and PT PLN also needed to build capacity to enable the adoption of smart grid technologies. Also, a consensus was needed on effective planning and implementation requirements to introduce such technologies and efficiently expand nationwide electric power transmission and distribution.

In 2011, during preparation of the Second Power Transmission Development Project in Indonesia, the idea of introducing practical smart grid in the country was discussed. Power sector officials expressed strong interest in learning from the experience and accomplishments of smart grid projects and the benefits accrued for large industrial and commercial customers. In the last 15 years, about 100 Brazilian companies have been involved in power transmission and distribution; most of these 100 have made significant achievements in those areas where Indonesia faced significant challenges. The proposed exchange between these countries would therefore support both the Indonesian Government’s energy conservation strategy and the World Bank’s energy sector program for Indonesia.

With daily presentations and question-and-answer sessions, participants better understood the perspectives of each country’s energy sector and their respective challenges. The exchange raised awareness among Indonesian policymakers and practitioners on the benefits of and conditions required to adopt smart grid technologies. It facilitated practical experience in planning and implementing smart grid programs and laid the foundation for further cooperation and exchange of experience between government agencies responsible for policy and regulations of the power sector and utilities in the two countries.

The Brazilian team generously shared their experience. Although the visit focused on smart grid deployment, discussions broadened to include energy planning, regulations, electricity tariff setting, and mobilization of public and private investment for new generation capacity, including renewable energy. This heightened the interest of the Indonesians, and they expressed a desire to follow up.

The World Bank has expanded its engagement in the energy sector with the Indonesian Government, including in financing transmission and distribution network improvement.  Apart from Indonesia’s Second Power Transmission Development Project approved by the World Bank’s Board of Executive Directors in 2013, a new results-based loan to support distribution system expansion is under preparation and scheduled for the Board’s approval in FY16.

Indonesia and Brazil can continue to operate in the energy sector in the following areas: (a) smart grid in power distribution; (b) planning and auctions for new generation capacity, including hydro and other forms of renewable energy; and (c) tariff setting. Smart grid experience exchange is expected to continue in the framework of the Technical Assistance to PLN for Smart Grid Capacity Building financed by AusAid.

World Bank staff in Indonesia and Brazil collaborated to organize the May 2012 exchange. Six members of the Indonesian delegation, representing the Directorate of Energy Conservation under the Ministry of Energy and Mineral Resources and PT PLN, the national power utility, were supported by the South-South Facility grant. Two other officials from MEMR were funded by the Government of Indonesia.

The second exchange in December 2013 was facilitated by the World Bank team, but fully financed by the Government of Indonesia.

Scaling up energy efficiency in Indonesia, the Philippines and Vietnam: http://www.worldbank.org/en/news/video/2014/02/18/scaling-up-energy-efficiency-indonesia-philippines-vietnam