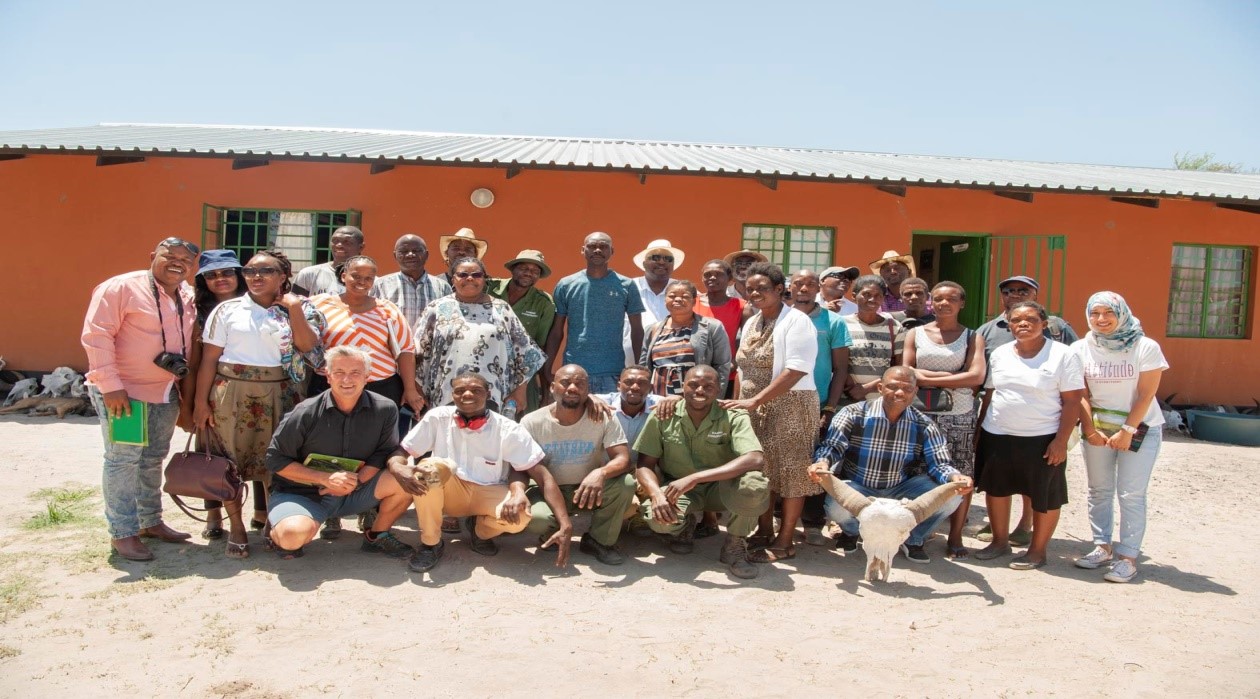 In October 2019, the Namibian Ministry of Environment and Tourism, Directorate of Wildlife and National Parks, in partnership with the Namibia Association of Community-Based Natural Resources Management Support Organizations (NASCO), facilitated a seven-day study tour to Namibia for a delegation from South Africa. The program consisted of a combination of interactive technical workshops and field visits to engage with communities in different conservancies, meetings with Conservancy committees and Traditional Authorities

In 2018, the Government of South Africa, through the Department of Environmental Affairs (DEA), requested support from the World Bank to prepare a new programmatic project titled “South Africa:  Rural Development for Biodiversity Conservation around Protected Areas” which aims to reduce rural poverty, create jobs, conserve biodiversity and restore degraded lands around protected areas (PAs). The South Africa’s SANParks, iSimangaliso Wetland Authority and other Protected Areas authorities have been seeking to address the challenge of coupling biodiversity conservation, landscape and seascape restoration with rural development, recognizing the importance of maintaining and protecting the conservation estates while positively impacting the well-being of the communities adjacent to the protected areas.

The capacity development goal of the knowledge exchange was for South African senior government officials to (i) accrue the practical knowledge needed  from successful examples, lessons learned and coaching, and (ii) to promote rural development around PA landscapes. This would be achieved while addressing rural poverty, ensuring biodiversity conservation and the protection of natural resources. The host delegation in Namibia was also interested in learning from their South African counterparts about how to scale up participatory governance models using inclusive planning for PA landscapes that involve local government, communities and other stakeholders.

On arrival to Katima Matte in Namibia, the delegation was welcomed by the team facilitator, Ms. Maxi Louis from NASCO. The knowledge exchange workshop began with introductions and an overview of the South African context was provided by the head of delegation, Sibusiso Bukhosini, Chief Executive Officer, Isimangaliso Wetland Authority. During the following session, an overview of the land reform program in South Africa was provided by Ngcali Nomtshongwana, Project Manager of the Land Reform program, SANParks.

This was followed by sessions facilitated by Namibian officials from the Ministry of Environment Parks and Wildlife and NASCO. The topics covered included an overview of the policies and their impact on community-based natural resources management (CBNRM) in Namibia. There were also sessions covering thematic areas of how Namibian communal conservancies are established and operated. The South African and Namibian participants continued to interact and exchange knowledge through debates centered around communities and conservation in general and peer learning activities that allowed to share country-specific examples. Technical sessions focusing on the CBNPRM program were conducted and enriched by field visits into the communal areas of Namibia. During the field visits, the delegation had the pleasure of engaging with various Conservancy committee members, traditional authorities and communities living around conservancies. The delegation also experienced a safari boat ride into the Babwata National Park to learn from some of the activities offered through a joint venture agreement with the Mashi conservancy.

During interactions with communities, the delegation was able to see tangible benefits from wildlife conservation being accrued to previously marginalized and poor communities. They met and had discussions with various communities and learned how much these communities appreciate and respect wildlife despite the challenges of living in proximity of large and dangerous animals.

Below are the key lessons learned:

“In closing, I just have to say that Namibia have an almost perfect model in spite of the many challenges associated with CBNRM initiatives. I think the program embodies what South Africa is hoping to achieve: “Conservation for the people, by the people” – MA South African Official

“We in Namibia would like to thank the World Bank for sponsoring and funding the South African participants to visit our country and our rural communities that embrace the concept of Community-Based Natural Resources Management. We also take the opportunity to thank Piet Izak Theron for co-facilitating and taking care of all the logistics during the visit, he is such a humble honest soul. I would also thank Mr. Iretomiwa Olatunji for making sure funding was secured for the exchange trip.” Yours in conservation for our African Continent – Maxi Pia Louis, NASCO Director and Naambo Josephine Iipinge, Ministry of Environment and Tourism, Parks and Wildlife, KAZA Namibian Coordinator.

In 2018, The World Bank in response to the Government of South Africa, through its Department of Environmental Affairs (DEA), provided support in the preparation of a new programmatic program entitled “South Africa Rural Development for Biodiversity Conservation around Protected Areas”. The knowledge exchange with Namibia, funded by the World Bank’s South-South Facility, provided additional support to strengthen capacities and technical know-how to promote rural economic development in communities around Protected Areas.

World Bank teams from the Environment, Natural Resources and the Blue Economy, Global Practice , the Governance Global Practice, Development Economics (DEC) Vice Presidency Unit and the World Bank Office in South Africa contributed to the design, planning and implementation of this knowledge exchange.

The knowledge exchange generated interest in future opportunities to share experiences between South Africa and Namibia. An example is exploring ways of fostering partnerships and knowledge sharing between traditional leaders from the two countries.

As part of the next steps, the World Bank is working with the South African Department of Environment, Forestry and Fisheries, SANParks, iSamangaliso Wetland Park Authority and SANBI on a project to further advance the biodiversity economy and key landscapes adjacent to protected areas. The lessons learned from this knowledge exchange will be incorporated into the project design phase of the GEF 7: Biodiversity Economy Project.

New knowledge: The participants gained new knowledge on the type of policies that help create an enabling environment for strong community-based natural resource management (CBNRM). They gained insights into how to design and support community structures; revenue sharing models; how to engage traditional authorities as champions; how to provide training to communities, especially women and youth living around protected areas; managing human-wildlife conflict particularly when wildlife numbers increase significantly. In Namibia, communities have been well equipped to take the lead in the CBNRM program.

Increased coordination: The South African delegation noted the importance of setting up a coordinating body like the Namibian Association of Community Based Natural Resource Management Support Organizations (NASCO). Having a similar coordinating body would add significant value in improving the effectiveness of the programs both at national and grassroots levels. Currently, there is weak coordination mechanism between multiple implementing agencies and stakeholders. Participants reflected on the possibility of using the People and Parks program, under South African National Parks (SANParks) as an overarching body to coordinate community engagement.

New skills and improved actions: Participants learned the importance of developing a shared vision, goals and objectives in consultation so that it will be more accepted by rural communities and other stakeholders in South Africa. They admired the successful role communities play in anti-poaching and reducing illegal wildlife activities. In Namibia, communities living around protected areas are responsible for conducting game counts as well as contributing to the national wildlife audit system through NASCO. NASCO gathers data from communities and reports the program outcomes using facts and figures in an engaging and easy-to-understand manner for stakeholders and politicians. Participants discussed the value of fostering partnerships and knowledge sharing between traditional leaders from Namibia and South Africa.