Improving Livelihoods of the Rural Poor in Vietnam 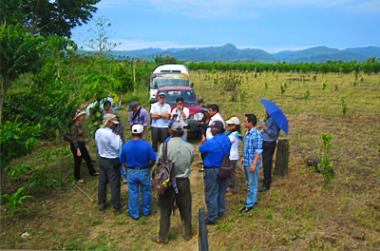 To address disproportionately high rates of poverty among ethnic minorities, the Government of Vietnam planned several national assistance projects in the poorest regions of the country. Vietnam sought a knowledge exchange to learn how similar poverty issues have been approached in Brazil and Bolivia based on these countries’ success with community-driven development and rural alliances projects.

The Government of Vietnam sought innovative ways to address the disproportionately high rates of poverty among ethnic minorities in an effort to support productive livelihoods among the rural, indigenous poor. The Government had planned national assistance programs and projects in the poorest regions of the country such as the Northern Mountains Poverty Reduction Project (NMPRP) and the Central Highlands Poverty Reduction Project (CHPRP), both supported by the World Bank and other development partners. However, policymakers lacked key knowledge and experience such as using value chain analysis, building public–private linkages, and integrating sustainable strategies within the broader territorial development planning processes of the provinces. In addition, marginalization of ethnic minorities leads to a failure to appreciate and incorporate the community’s concerns during development planning, rendering government support inefficient. The Ministry of Planning and Investment (MPI), responsible for the implementation of these projects, was committed to addressing these challenges, in part through the knowledge exchange with Brazil and Bolivia.

The Government of Vietnam sought a knowledge exchange to learn how similar poverty issues have been approached in other countries. Brazil and Bolivia were selected as knowledge providers based on their success with community-driven development (in NE Brazil) and rural alliances projects (in Bolivia). Both Latin American countries have rural, indigenous poor working in difficult-to-reach, mountainous terrain similar to Vietnam.

Delegates from Vietnam were primarily mid-level central and provincial staff directly responsible for overseeing the implementation of NMPRP and CHPRP as well as a few policy-level staff from the central ministry. One team of 10 government representatives travelled to Bolivia (September 2012), and another team of 14 government representatives travelled to Brazil (December 2012).

The respective teams of delegates met with national (Bolivia) and state (Brazil) ministry personnel and program staff who shared program data, including strategy documents, progress reports, and informational materials, and undertook field visits to specific producer groups and partners. In Brazil, the delegation visited the Prorural Project, a sustainable development program in Pernambuco, developed to support 35,500 households through business household development, improved agricultural irrigation Infrastructure, and project management. In Bolivia, the team worked with the Ministry of Land and Rural Development’s EMPODERAR project, which promotes productive alliances between producer groups and buyers at the local level and increases access to productive assets and technology in 110 municipalities (about one-third of the rural municipalities in Bolivia).

Delegates visited sustainable development programs built around small-scale cashew nut processing, tilapia farming, onion farming, and women’s unions producing goat and cow dairy products. They engaged in discussions on ways in which provider government authorities have approached and integrated indigenous communities and their practices into the programs and how different attitudes can help or hinder these efforts.

The engagement of two different poverty projects in Vietnam helped to cement the interactions between the two project teams and improve internal communication. They agreed that it would be beneficial to increase support for capacity building of common interest groups.

The dissemination workshop at the end of the grant period brought together members of the two study tours with a wider audience of project and government staff and ensured that participants were able to understand the rural alliance concept well enough to explain it.

The World Bank brokered the exchange with a grant of US$42,654.

The knowledge providers were the staff of the Ministry of Land and Rural Development and the Rural Alliances Program (PAR in Spanish) of Bolivia, and the groups of rural producers who have benefitted from the technical assistance and training of the PAR.

In Brazil, the providers were the relevant staff of the rural development program (ProRural) of Pernambuco’s Secretariat of Agriculture and Agrarian Reform (SARA) and the producer groups and members of the productive alliances that have been formed under the program.

Both Bank projects, NMPRP and CHPRP, which benefited from the exchange, are currently under implementation. CHPRP planned to organize a workshop with several potential firms in the local area to introduce projects and find partnerships similar to the approach used in Bolivia.