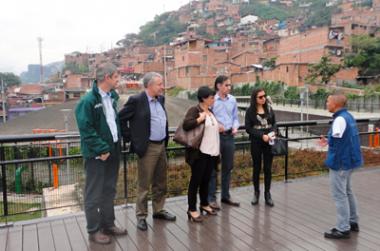 The commitment of the Metropolitan Municipality of Quito (MMQ) to provide access to adequate sustainable public services has been undermined by its inefficient and financially dependent enterprises. Through an exchange, the Municipality of Medellin and Empresas Públicas de Medellin (EPM) shared best practices and lessons learned from their administration modernization process. As a result, MMQ enhanced its knowledge about corporate governance and developed action plans for reforms.

The Metropolitan Municipality of Quito (MMQ) is committed to providing its citizens with access to sufficient and sustainable public services through its 13 municipal enterprises, which constitute the main providers of public services in Quito. However, most of these enterprises lack strategic and managerial guidance and are financially dependent on the Municipality. They also operate in a non-integrated way, resulting in suboptimal coverage and unsatisfactory quality of public services delivery. Therefore, MMQ was interested in learning from successful experiences of reforming public enterprises, in order to establish an efficient and sustainable organizational model for its own municipal enterprises.

Since 2013, the World Bank has been providing technical assistance to the MMQ to strengthen its institutional capacity and to improve the corporate governance of its municipal enterprises. During this process, the idea of having a knowledge exchange emerged. The Empresas Públicas de Medellin (EPM) was chosenas the knowledge provider to assist with this task, because it is an extremely efficient public company that is acknowledged as a best-practice example in Latin America. Moreover, the size and the problems of the two cities are similar.

In preparation for a study tour to Medellin, a series of video conferences was organized between the two municipalities, during which the Bank’s task team introduced EPM and its corporate governance model to the Quito delegation. The participants from Quito and Medellin also initiated dialogue and exchanged preliminary ideas about the possibility of replicating EPM’s model in Quito.

In April 2015, an MMQ delegation visited Medellin for six working sessions. They met with EPM representatives and learned about the company’s structure, its Public Municipal Holding (PMH) model, and its community transformation program, Unidades de Vida Articulada (UVA). They also met with representatives from civil society and the Finance Secretariat of Medellin to learn about the quality of public services and the technical aspects of municipal financial management, respectively.

A Bank consultant assisted the delegation, on their return to Quito, to draw upon lessons learned to support the preparation of a work proposal in order to replicate the PMH model, the UVA initiative and the Municipal Financial Management System in Quito.

The exchange, supported by a well-prepared agenda and committed participants, achieved the following:

The exchange was financed by a grant of US$49,000 from the South-South Experience Exchange Trust Fund. In addition, Bank staff prepared the study tour agenda and facilitated the exchange process.

The Municipality of Medellin, together with civil society in Colombia, has developed a strategy to make Medellin open to the world. Its high level and skilled professionals from all agencies were very well prepared and willing to share their knowledge and experience with counterparts from Quito. Participants consisted of representatives from the following institutions:

Participants from Quito included key staff from MMQ and selected municipal companies. The General Administrator of the MMQ and other high level policymakers with a special focus on municipal enterprises participated in the knowledge exchange. Representatives from municipal companies included managers and technical staff who are closely linked to the reform process.

After learning about the PMH model, Alexandra Pérez, General Administrator of MMQ and head of the delegation, was convinced of the model’s significant advantages in public administration and corporate government and was very motivated to replicate the model in Quito. The delegation acknowledged that this activity contributed to the ongoing reforms for more efficient municipal enterprises in MMQ, a top priority of the Metropolitan Development Plan for 2012-2022. The exchange also provided input for the elaboration and implementation of a municipal enterprise strategy for the MMQ.