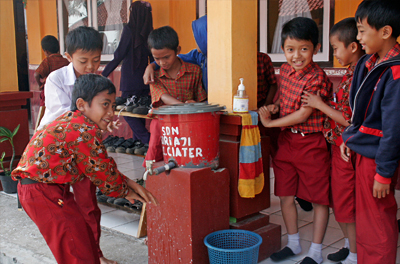 The Government of Vietnam wanted to strengthen its delivery in rural water supply and sanitation projects by promoting the use of a results-based approach at the local government level. Through help from the World Bank, a Vietnamese delegation consisting of key government officials visited Indonesia to exchange knowledge and share experiences on the broad topic of results-based incentives for local governments to effectively and efficiently deliver infrastructure services.

After many intervention in the rural water supply and sanitation (RWSS) sector, in 2012, the Government of Vietnam was facing the questions of how to best incentivize local governments to deliver results and how to strengthen the government systems to implement the Program, especially with regards to their (i) weak capacity for planning, budgeting, and implementing programs; (ii) weak accountability in investment programs; and (iii) weak monitoring and evaluation of investment programs.

The Government of Vietnam recognized that linking project disbursements to actual achievements in improved RWSS services while using a conditional country systems for fiduciary, environmental and social management (as described in the Program Action Plan) could be a way to incentivize service deliveries.  The results-based disbursement can incentivize the local governments to better delivery RWSS services. These are the lessons they learned through a similar initiative in Indonesia, a neighboring country. A knowledge exchange with Indonesia offered a just-in-time opportunity for the Vietnamese Government to better understand the benefits and challenges of this new approach.

The Exchange included a week-long Study Tour to Indonesia which took place in April 2013. The Study Tour included field visits to Jakarta and Malang. The main objective of the Study Tour was to exchange knowledge and share experiences on the broad topic of results-based incentives for local governments to effectively and efficiently deliver infrastructure services. The Vietnamese delegation was particularly interested in learning about Indonesia's experience of incentivizing local governments to improve the accountability and reporting of the central government's Specific Purpose Grants (DAK) through the Bank-supported Local Government and Decentralization Project (LGDP).
The Vietnamese delegation included a 7-person team:

The participants from Indonesia were from the Ministry of Finance, Ministry of Public Works, the Supreme Audit agency (BPKP), as well as the government of Malang City, East Java.

Participants became more aware of the output and result-based approach after the Study Tour and were motivated to adapt the new principles of this approach in Vietnam.

As a result of the Exchange, the plan was to apply directly knowledge gathered from the trip to enhance the implementation of the Rural Water Supply and Sanitation (RWSS) Program-for-Results (PforR) project (P144385), especially in verification activities.

The Bank (both Vietnam and Indonesia Offices) contributed human resources and guidance for the organization and implementation of this Study Tour, ensuring the successful achievement of intended outcomes.

The World Bank Office in Jakarta organized a “brown bag lunch” (BBL), which included the Vietnamese delegation. The Vietnam PforR was presented and the participants had the opportunity of discussing the pros and cons of the PforR instrument, and especially incentives for government to adopt this instrument as well as the intricacies of the preparation process.

The Vietnamese delegation proposed further hands-on knowledge sharing, especially in the areas of verification where BPKP had developed a smooth operation to verify the results. The team suggested that a BPKP specialist could visit Hanoi to work with the NCERWASS and SAV team on verification mechanisms and reporting. In addition, they suggested that a Ministry of Finance official could visit Hanoi to share lessons with MPI and MOF on the lessons of decentralization and performance-based grants for infrastructure delivery.

The Bank team also learned valuable lessons from the Local Government Development Program (LGDP) from Indonesia specifically and considered how these could be applied to the Vietnam Northern Mountains Urban Program, especially regarding the LGDP approach of using performance-based fiscal transfers to local governments under the DAK as well as from the role of the central government agency (Ministry of Public Works in Indonesia) in providing technical