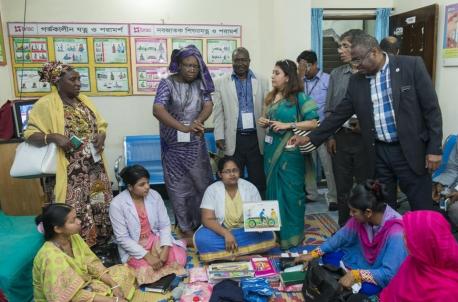 Many Sahel countries in Africa are expected to nearly double their population by 2030 due to high fertility rates. Meanwhile, since 1970 in Bangladesh, which has a similar religious context and other shared development challenges as the Sahel, the fertility rate declined from 6.3 to 2.3 births per woman and the rate of contraceptive users increased from 7% to 62.4% in 2011.

To understand how Bangladesh had achieved such impressive results, authorities in five Sahel countries wanted to learn from Bangladesh’s experience. Through a seven-day study tour to Bangladesh, high-level delegates from the Sahel countries learned how to coordinate multi-sectoral population policies and implement new strategies to strengthen community services and empower women. The visit also raised awareness of the importance of engaging religious leaders in family planning.

Sahel countries in Africa expect to nearly double their populations by 2030, with severe impacts for economic and social development. Fertility rates are very high throughout the Sahel, where contraceptives use remains low: women in Mali give birth to 6.1 children per woman, in Niger 7.6, in Burkina Faso 6, in Chad 6.4, and in Mauritania 4.2.  Sahel countries increasingly understand that addressing population growth is a multi-sectoral challenge encompassing poverty reduction and sustainable economic development.

Many of the Sahel countries are signatories to the 2011 Ouagadougou declara­tion to improve family planning outcomes, but progress has been slow despite political support and many years of family planning interventions. Sahel countries face constraints that limit implementation of national population policies and programs including complexity of coordinating across multiple sectors and agencies, gender and religious barriers, and poor community-based service coverage. The Sahel countries needed to learn new, innovative implementation approaches to address population issues.

Bangladesh has a successful multi-sectoral population policy. Since independence in 1971, the Government maintained a serious, sustained multi-sectoral response to population challenges.  Bangladesh faced many of the same challenges as Sahel countries, such as weak multi-sectoral coordination, poor community engagement in family planning, cultural preference for large families and women’s low status. As signatories to the 2011 Ouagadougou Declaration to improve family planning outcomes, the Heads of State in Mali and Niger publicly support reproductive health priorities, as do the Prime Ministers, First Ladies, and Ministers. The Governments of Mali and Niger requested a knowledge exchange with Bangladesh to learn how to address critical constraints to population programs.

To introduce the Sahel countries— Mali, Niger, Burkina Faso, Chad, and Mauritania — to the experiences of Bangladesh in addressing population challenges and increasing use of reproductive health services, the World Bank, together with the United Nations Population Fund and funding support from the South-South Facility, organized a knowledge exchange with Bangladesh.

Before the exchange, World Bank staff implemented the following activities to prepare for the study visit to Bangladesh:

The study tour's program was then structured to provide participants the best opportunity to learn extensively through practical exchanges with persons involved in the Bangladesh Population Policy based on needs the five Sahel countries had identified.

“Bangladesh has well-developed practices of pluralism, community engagement and multi-sectoral collaboration, which have helped make its Family Planning program and its Population Policy a success. The government has placed women at the center of the development agenda. It worked with local non-governmental organizations that helped the country achieve success in family planning and address population challenges,” said World Bank Country Director Qimiao Fan during the opening ceremony of the exchange.

The main part of the knowledge exchange was a seven-day study tour to Bangladesh from May 14 – 20, 2016.  The Sahel country delegates, including two ministers of population and a mix of senior officials and experts from areas such as religious affairs, planning, finance, health, women’s affairs, and education, participated in structured discussions with leaders in Bangladesh. The Bangladesh participants included representatives from the Planning Commission, Family Planning Directorate, Population Council, Islamic Foundation, Imam Training Academy, Female Secondary School Assistance, Women’s Affairs, and NGOs.

“We chose Bangladesh because, like Niger, it was once an underdeveloped country and the majority of the population is Muslim. We really wish to deepen our knowledge and understand how the local women here obtained their independence and how they gained empowerment. We are thus eager to find out how the population policy succeeded here and how we could try to adopt it in Niger,” said Rakiatou Christelle Kaffa Jackou, Niger Minister for Population, Promotion of Women and Child Protection.

The discussion component of the exchange was followed by site visits to the Imam Academy and the Underprivileged Children’s Educational Programs (UCEP). They also visited public health services like the Maternal and Child Welfare Center (MCWC) and Palash Community Clinic in Narsingdi, as well as nonprofit, private models for health services deliver, such as the BRAC Health Program.

Each day of the study tour country delegates captured detailed lessons to present to ministries at home. The delegations used a “before-action review” and a daily “knowledge-harvesting” analytical exer­cise to capture experiences and insights from the activities. These methods capture qualitative information on how key results were achieved. At the end of the exchange, participants formulated action plans for their own countries based on lessons learned.

The main lesson for countries is the multi-sectoral nature of addressing population issues. The Sahel countries understood the need for a vision based on economic development, not health alone, and that the success of Bangladesh’s population policy is based on its multi-sectoral commitment.

Engaging community-level actors was also an important part of this exchange. The participants saw firsthand examples of how Bangladesh has organized door-to-door women’s health services.

Having a mixed team of study tour participants from the Sahel countries was important to take forward the multi-sectoral objectives of the exchange. Each participant was identified as having a potential role to support actions following the exchange. Sahel countries were represented by a high-level delegation that included two ministers of population and a mix of senior officials and experts from areas such as religious affairs, planning, finance, health, women’s affairs and education. In total, the delegation had 40 members.

The knowledge exchange supported the National Health Project in Mali and the regional World Bank Sahel Women’s Empowerment and Demographic Dividend (SWEDD) project. The exchange also supported country operations in Mali and Niger, which include goals to empower women, increase access to reproductive health services, and generate knowledge for regional dissemination. The challenges, objectives, and agenda of the exchange were anchored to the learning needs of World Bank country operations to advance effectiveness of the operational plan and strengthen country results.

The Sahel country delegates want to continue to learn from Bangladesh’s highly successful gender-empowerment activities. The countries also want to learn from Bangladesh’s programs designed to reach villages and families, and about the service delivery strategy of “door-to-door, face-to-face, woman-to-woman”. They also want to continue to learn to engage religious leaders as change agents.

The religious component will also take an important role in other activities, such as the SWEDD project.  Through SWEDD, the learning from this activity will be disseminated to other countries.

New knowledge: The participants deepened their understanding of how Bangladesh formulated, coordinated, and implemented its Population Policy. In addition to engaging citizens, the participants also learned how Bangladesh coordinates with the private sector, NGOs, and civil society to improve service delivery to poor communities and villages.

At the Imam Academy, participants learned about Bangladesh’s innovative approaches to engage religious leaders, including engaging the Ministry of Religious Affairs as a main partner to coordinate and implement the Population Policy.

Participants also learned how Bangladesh empowers women to be more able to affect family planning decisions; the visit to the Underprivileged Children’s Educational Programs (UCEP), for example, demonstrated how women in Bangladesh are empowered through skills-building activities.

The Sahel participants also learned how Bangladesh engages citizens to deliver family plan­ning services. The delegation visited public and nonprofit, private models of health services, such as the BRAC Health Program, to observe how door-to-door services are delivered and how the community is involved in family planning and counseling. For example, an alarm sounds in some communities at 9pm daily to remind women to take contraceptive pills.

Improved consensus: One of the study tour’s main lessons for participants was that developing effective population programs that contribute to a country’s economy requires a national, multi-sectoral vision. Such a vision needs to be anchored in the Ministry of planning or Finance, and it must withstand and transcend political changes. Several of the Sahel counties are now in­terested in formulating a multi-sec­toral, national plan coordinated with community stakeholders to secure financing and ensure implementation of actions to address population issues.

Participants also gained appreciation for the key role religious leaders play in communicating messages to families, and thus the need to engage religious actors to support reproductive health. The par­ticipants proposed that their countries implement formal training for Imams similar to the program conducted by the Bangladesh Ministry of Reli­gious Affairs. In Bangladesh, each trained Imam is leading prayers five times per day to 300-400 individuals.

“The partnership of religious actors in the population policy in Bangladesh built understanding around the importance of engaging religious leaders in Sahel countries in national and community-level programs,” said Jenny Gold, World Bank Senior Health Specialist.

New and improved actions: Through presentations, interactive discussions, and field visits, the participants identified key lessons that prepared them for formulating their own plans and ac­tions for their respective countries. Each country delegation prepared a presentation with action recommendations for respective governments and partners focused on several specific areas:

The office of the United Nations Population Fund (UNFPA) in Bangladesh worked with the World Bank country office to identify experts who could share experiences and organize the site visits. They also paid for a dinner, photographer and organized a media session.

UNFPA West Africa sent representatives to the exchange, who coordinated the SWEDD regional activities. They participated in the exchange, provided logistics support and supported follow-up actions through the SWEDD program, including with the religious leader program.

The Norwegian Agency for Development Cooperation (NORAD) funded some follow-up activities conducted after the exchange related to engagement with religious leaders.

The Government of Mali paid for the follow up exchange visit to Tunisia.