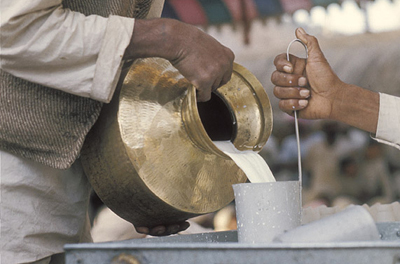 While Tanzania and Uganda had taken measures to increase milk production, including creation of National Dairy Development Boards (NDDBs), problems in the milk supply chains continued to hamper milk output. Tanzanian and Ugandan Ministry of Agriculture and other dairy sector officials wanted to learn from India, where a “white revolution” had expanded milk production dramatically over two decades. The World Bank’s South-South Facility supported a knowledge exchange between officials from the Ministry of Agriculture and NDDB in Uganda and Tanzania and officials and experts from India’s NDDB and the Gujarat dairy cooperative to improve strategies, production and other supply-chain techniques, and regulations to increase milk output in Uganda and Tanzania.

The exchange enhanced the knowledge and skills of government and NDDB officials in Uganda and Tanzania to promote growth of the dairy sectors and milk production in each country. The officials were exposed to best practices to strengthen value chains for milk production which they incorporated into a comprehensive plan for dairy sector development.

These specific management and production techniques, combined with broader policy actions, have contributed to vast increases in milk production in the two countries. In 2011 the Ugandan dairy sector yields 55 liters of milk per person, up from 25 liters per person in 2004,1  for instance, which has helped save the lives of perhaps tens of thousands of children.

The Governments of Tanzania and Uganda realized that improving the dairy sectors could contribute substantially to reducing child and maternal mortality—part of the Millennium Goals—while increasing income for small rural households. The countries established National Dairy Development Boards (NDDBs) to strengthen their dairy sectors, but dairy output remained constrained by weak production, processing, and marketing techniques; slow uptake of technology; and problems in the dairy regulatory environments as well as in the organization of village-based dairy cooperatives.

The Ministries of Agriculture and NDDBs had limited technical and administrative capacity to overcome these hurdles and guide growth in the sector. Recognizing these constraints, officials sought assistance from India, where milk production had nearly doubled in the 15 years before 2007 to make India the largest milk-producing country in the world.2 The World Bank’s South-South Facility supported a knowledge exchange between Tanzanian and Ugandan government officials and milk production experts and Indian NDDB experts and representatives from the Gujarat dairy cooperative. The aim of the exchange was to improve strategies, regulations, and production and other supply-chain techniques to increase milk output in Uganda and Tanzania.

The exchange and associated activities are ultimately expected to increase milk production in Uganda and Tanzania and help to reduce child mortality. Follow-up World Bank loans, which have been tied to reforms identified in this exchange, envisioned increases in the annual quantity of milk produced per person from 55 liters in 2007 to 60 by the end of 2011 in Tanzania, and from 25 liters in 2004 to 55 liters by the end of 2011 in Uganda.3

Tanzanian and Ugandan officials aimed to develop a long-term relationship with India and to integrate acquired knowledge into domestic and donor programs supporting the dairy sector, including those of the World Bank. As of 2011, the strategies developed during this exchange have informed the design of two World Bank projects, including the Private Sector Competitive Project in Tanzania, and the Private Sector Competitiveness II Project in Uganda.