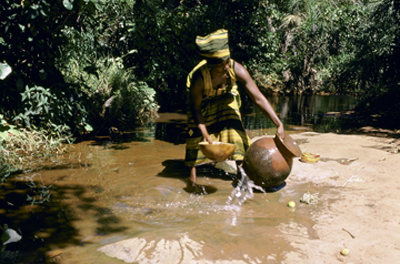 Despite having the mighty Congo River—the third largest in the world—along its entire Eastern border, Congo lacks a proper water infrastructure; as a result nearly three quarters of Congo’s urban population has no access to clean water. Congo’s Ministry of Energy and Hydraulics requested the World Bank’s help to reform and encourage private sector investment in the water sector. In the late 1990s, the World Bank had helped Burkina Faso’s National Water Utility (ONEAi), overcome similar funding and management challenges to those in Congo, transforming ONEA into a model African water utility. The World Bank organized a knowledge exchange for Congolese water-sector practitioners to visit Ouagadougou in Burkina Faso and for ONEA experts to travel to Brazzaville in Congo. The exchange aimed to increase Congo’s capacity to improve and expand urban water services through public-private partnerships (PPP) and support overall water sector reform.

“The experience was very fruitful because it greatly contributed to the change in the corporate culture of [the Congolese participants],” said Mahine Diop, Senior Municipal Engineer at the World Bank in Congo. “[The activities] fostered adhesion of the staff to the reforms.”

The exchange helped the Congolese national water utility, SNDEii, learn to establish and negotiate PPP contracts: exchange organizers expected that SNDE would select a private operator to manage the water and sanitation during summer of 2012. The Congolese officials also managed, following ONEA’s example, to bring union representatives to the table for discussions. This strengthened the network of stakeholders involved in the water sector and allowed Congo to move ahead with reforms. The Congolese also benefited from ONEA’s technical experience, for instance in standpipe management. As a result, Congo began to install 175 new standpipes to increase clean water supply in poor urban areas. The exchange also improved SNDE’s monitoring and evaluation (M&E) capacity.

“We have seen how ONEA has defined a strategy, development programs, and management tools in each sector, with performance indicators for each service, to avoid getting lost in the daily tasks,” said Adelaide Eleanor Moulouba, Chief Financial Officer at SNDE.

Decades of state intervention in the economy and recurrent conflict left infrastructure and public institutions in the Republic of the Congo in shambles. This situation is in part responsible for the country’s water paradox: three-quarters of Congo’s population is without access to clean water, despite its proximity to the massive Congo River, the world’s third largest. To address a dated pipe network, poor water infrastructure maintenance, and a nearly bankrupt utility, among other problems, the Ministry of Energy and Hydraulics requested the World Bank’s help in establishing a Public-Private Infrastructure Advisory Facility (PPIAF) to finance water sector reforms and attract private investment. The Bank and the government of Congo also started the Water, Electricity, and Urban Development (PEEDU) project to increase sustainable access to safe drinking water.

During the PEEDU project preparation in December 2009, ONEA shared its successful experiences of contracting private service operators with SNDE and other key water sector stakeholders in Congo. The first dialogue helped convince the Congolese about the suitability and benefits of public-private partnerships and helped them understand that service contracts might be the best option to reinforce the technical, commercial, and financial capacity of SNDE. Thus the South-South facility financed a more comprehensive knowledge exchange between the two countries to help SNDE staff improve and expand water supply services in urban areas, such as Brazzaville and Pointe-Noire, as well as reform Congo’s water sector.

Following the activities, the World Bank began organizing another exchange for ONEA to share its knowledge with Chad and Central African Republic. ONEA is becoming better known in Africa, and many utilities in the region, especially in countries with similar levels of poverty, are interested in learning from its successful experiences.

Additionally, ONEA and SNDE are discussing formalizing the exchange by creating a joint management protocol. This protocol will ensure that the collaboration between the two water utilities will continue and their experiences will inform policies in other African countries.