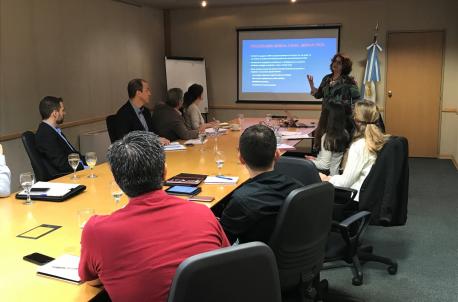 The Government of Argentina (GOA) launched in 2016 the first nation-wide demand-side housing supply program for first-home buyers (the Linea Solucion Casa Propia Program, SCP). The World Bank, as part of the Integrated Habitat and Housing Project (P159929), is supporting the SCP. The SCP provides a lump-sum subsidy to eligible households, which, together with a saving amount and a mortgage loan provided by the open market, is used for the acquisition of a housing unit. The program targets middle to low-income households (earning between 2 and 4 minimum wages), who would not be able to purchase a housing unit without government support. The SCP builds upon the recent legal introduction of indexed lending, which enables the provision of mortgage loans with lower real interest rates, making the repayment more feasible for many in a high volatility and inflation context as is the Argentine one.

As part of the roll-out of the program, the Government of Argentina was facing two main challenges:

1. Supply side constraints: The SCP supports the housing demand-side, by improving access to eligible households for the purchase of new or existing housing. However, the housing supply (developers and constructors) for this segment of the population is not responding as rapidly as anticipated. The provision of demand subsidies in absence of an elastic supply would lead to increases in housing prices, thus defeating the main objective of the SCP, which is to expand affordability. The GOA has therefore requested World Bank’s assistance on identifying alternatives to unlock the supply of affordable housing. Experience on similar strategies is available in countries such as Brazil and Mexico, which both have long standing demand-side housing subsidy programs.

2. Housing Finance Infrastructure: The GOA has recently requested technical assistance support towards the construction of the broader housing finance infrastructure that will allow the program to be successful in the long term. The GOA is exploring opportunities to support banks´ long term funding strategies (through a securitization scheme), as well as to reduce the credit risk and lower costs for consumers. The options being explored include the setting up of a SWAP mechanism between the inflation indexed currency (the Purchase Value Units, Unidades de Valor Adquisitivo - UVAs), and the minimum wage. Similar schemes have been developed in Colombia and Mexico during high inflation periods in the recent history, and therefore these countries have extensive - and very operational - experience on how to set up similar complex instruments.

Supply side constraints: To assist the GOA in exploring alternatives to bring in the private sector to enter the affordable housing market, and deliver housing solutions, the World Bank, using a South-South Facility grant, shared examples from Brazil and India with the GOA.

From Brazil, in connection with the AR Integrated Habitat and Housing Project, Ines Magalhaes, the former Minister of Cities of Brazil travelled to Buenos Aires to share the experience with the Minha Casa, Minha Vida Program. Brazil’s Minha Casa Minha Vida (My House, My Life) program, launched in 2009, has supported over its first two phases (a third phase was launched in 2015), the construction of 3.6 million housing units, through the allocation of approximately US$ 57.5 billion to the program by October 2014. The funding comes from the federal budget and the provident fund (FGTS) and is allocated through Brazil’s largest public bank, CAIXA. It relies on the cooperation of local governments to facilitate access to land and deliver permits for the projects and private developers to build the project. Mrs. Magalhaes shared, in particular, the experience related with bringing in the supply, through the holding of open bids by the central government, with strict specifications on the quality, design, and access to services of the units.

From India, the World Bank facilitated an exchange with IFC colleague Sumeet Shukla, which presented a public-private partnership housing project, being built in Bhubaneswar, in the State of Odisha. The project envisions the construction of 2,600 affordable housing units in 13.17 acres of land, while the developer would be able to construct commercial buildings and/or residential units in the remaining 6.5 acres. The case study was particularly interesting given the level of detail provided and the impressive amount of affordable units built.

In May 2018, a delegation from the Argentine Secretariat of Housing, including the Secretary, came to Washington to participate in the World Bank’s 8th Global Housing Finance Conference. This gave them the opportunity to interact with housing professionals from around the world and share their experience with housing supply and finance issues. During their stay, they participated in a field visit to a mixed-income include public-private partnership development in Washington, DC.

Housing Finance Infrastructure: In connection with the preparation of the AR Housing Finance Development Project, the Bank invited a senior expert from the Mexican government to share the Mexican experience of managing risk for the housing finance sector in high inflation settings. Gabriel Gomez Reyes has worked as Risk Management Director and Director of Methodologies and Collateral Surveillance at Mexico´s second tier bank, Sociedad Hipotecaria Federal (SHF). In those positions he was, among other tasks, responsible for the measurement and management of all the risks incurred by the institution, including market risk, credit risk and operational risk. He holds an extensive knowledge in risk management, and is very familiar with the UDI-Swap instrument. He presented to the GOA the UDI-Swap instrument that was created in Mexico in 1996 to hedge against the risk of inflation rising faster than wages, after the crisis of 1994. Given the specificity of the subject, as well as the particularity of the high inflation environment, the hands-on knowledge of Mr. Gomez was particularly useful and hard to replace.

Knowledge exchanges among countries is the most useful form of technical assistance, and the Bank is best positioned to act as a convener. The exchanges can provide very practical lessons learned as well as useful "tips" on which often only other teams in the same situation can provide.

• National Director of Design and Implementation of New Housing Developments, Secretariat of Housing

• Advisor to the Pro.Cre.Ar, Secretariat of Housing

• Senior Advisors to Secretariat of Housing

• National Director for Urbanism and Planning, Secretariat of Urban Infrastructure

The World Bank acted as a convener, by reaching out to the most relevant experts in each field. Through the Integrated Habitat and Housing Project the Bank offered technical assistance, including the hiring of expert consultants that can continue the engagement and learning experience.

The World Bank will continue to support the GOA on housing supply and financing topics through the Integrated Habitat and Housing Project (P159929) and Housing Finance Development Project (P165563). The Bank is also continuing to provide technical assistance, on relevant topics that arised as part of this technical assistance. For example, the team is providing continued support to the GOA on structuring the first PPP contract for affordable housing.

New Knowledge: The participation by Ines Magalhaes contributed to adjusting the Government perspective on neighborhood upgrading programs, including providing useful ideas on land titling and implementing social strengthening interventions. In addition, the case studies from India and Brazil were both pivotal in understanding the approaches other developing countries, with limited supply side appetite, implemented to stimulate supply. The housing finance exchange was unique, in that it allowed to learn the details in designing the risk management instrument. The simulation parameters and assumptions were successfully incorporated from another country which underwent a similar process in practice.

Enhanced Skills: The exchanges improved the GOA’s team’s skills in dealing with the private sector in the housing industry – both developers and financiers; as well as in designing risk-management instruments for the housing finance sector.

Enhanced Connectivity: The examples selected were unique and therefore can easily be shared with countries facing similar challenges. The teams from Argentina, Mexico, Brazil and India shared contacts and are likely to keep in touch in the future, on specific issues.

New and Improved Actions: The knowledge exchange on PPPs led to the topic being included under the technical assistance provided under the Integrated Habitat and Housing Project (P159929). The GOA is advancing with the structuring of the first PPPs, along with World Bank support.

The housing finance technical assistance contributed significantly to informing the Government´s planned intervention, as well as the proposed Housing Finance Development Project (P165563), as the Project Concept Note Review was held a month after the visit.