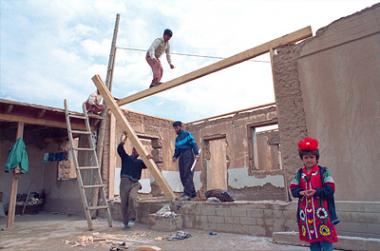 The Government of Tajikistan has enacted various laws calling for transferring responsibility for public service from the state unitary enterprise in charge of housing and utility services to local governments. But the implementation of these laws has been slow. This was due to deficiencies in institutional, opera­tional, and technical capacity of the local utilities and insufficient funding, both at the central and municipal levels. According to the latest national estimates, there was a US$2 billion financing gap to improve the drinking water supply alone.

The World Bank has been supporting the Government of Tajikistan to de­velop a Municipal and Communal Services Development Strategy. As part of this work, the Govern­ment requested additional financial support from the World Bank's International Development As­sociation. This support would assist in creating a financial mechanism to harmonize donor finan­cing that has been provided for developing municipal services. For this purpose, the Govern­ment's goal was to establish an appropriate rules-based financing mechanism at the central level, the Communal Services Development Fund. Such a fund would mobilize and pool capital from donors and government counterparts, and channel the funds to municipalities and service providers based on an agreed set of priorities and criteria. The Government's Municipal and Com­munal Services Development Strategy would serve to identify appropriate municipal sector finan­cing mechanisms and help establish the institutional and legal foundations for the Communal Ser­vices Development Fund.

Such financing mechanisms have been established in other developing countries with similar sectoral investment needs as in Tajikistan. It was recognized that representatives from key ministries and agencies would benefit from learning about other municipal development funds that have been successfully rolled out and operationalized to address immediate financing shortages.  A grant from the South-South Experience Facility made it possible to organize a knowledge exchange in the form of a study tour to Bangladesh and Georgia where the participants could observe and learn from the operations of such funds in the two countries.

Since the Tajikistan authorities had no previous experience in fi­nancing mechanisms of this kind, the knowledge exchange would enhance their practical under­standing of the regulatory and normative environment required for establishing the Communal Ser­vices Development Fund, and the degree of inter-ministerial coordination needed with regard to its management and operations. The exchange would also provide insight as to the potential for ex­panding the fund's capacity and the process of transforming it from an externally financed mecha­nism to an independent, self-sustainable credit-providing institution.

The design of the study tour was a combination of face-to-face discussions, presen­tations, demonstrations, and site visits. Bangladesh and Georgia had been selected for the study tour to provide different perspectives on municipal deve­lopment funds. The fund in Georgia demonstrated the extent and scope of an ad­vanced and success­fully running mecha­nism. One that had started out covering basic municipal ser­vices but over time had developed into an entity capab­le of financing larger infrastructure projects. In Bangladesh, the Tajik participants visi­ted a more basic fund, where they learned from the successes and bottlenecks faced in terms of procedural, struc­tural, and strate­gic reforms necessary to make the fund opera­tional. The Tajik delegation comprised the Di­rector General of State Unitary Enter­prise Housing and Communal Ser­vices, the Deputy Minister of Finance dealing with State Unitary En­terprises,  the Deputy Minister of Economy, the Head of the Municipal Infrastructure Development Project Management Unit, and repre­sentatives from the Infrastructure Development Department under the Executive Of­fice of the President. The delegation met respectively with representatives from the Ministries of Economy and Finance, municipal governments, and municipal fund experts in Bangladesh and Georgia.

The study tour was complemented by a high level conference, "Implementation of the Con­cept for Local Development in the Republic of Tajikistan for the period until 2030". The con­ference focused on ways to strengthen the roles of local and municipal governments in the coming decade. The confe­rence was ac­companied by a "Round Table Discussion on Local and Municipal Development Issues"-event organized by the World Bank. The pur­pose was to facilitate discussion and exchange among dif­ferent municipal develop­ment stakeholders on key challenges and ways for­ward in mu­nicipal and urban development issues in Ta­jikistan. At the round table dis­cus­sion, the findings of the Municipal and Com­munal Services Development Strategy were presented and validated.

The knowledge exchange offered the Tajik officials an opportunity to ob­serve the process on-site of two successfully operating municipal development funds and have practical and focused discussions with different municipality officials. This significantly enhanced their understanding of how best to coordinate, tailor, and roll out such a fund in Tajikistan.

The knowledge provided by Bangla­desh and Georgia helped the participants better understand the key elements and functioning of municipal financing mechanisms and substantially increased their understanding as to the purpose and scope of the Communal Services Development Fund in Tajikistan. The study tour significantly improved participants' understanding of the coordination and col­laboration requirements that would be needed by various ministries and agencies during the nego­tiations of the proposed Fund. They gained valuable knowledge in understanding the various municipal financing mechanisms that are available. In ad­dition, participants came to appreciate that improving the capacity and credit worthiness of mu­nicipalities and local utilities are prerequisites for them to qualify for credits under such a fund.

However, due to unforeseen circumstances, unrelated to the knowledge exchange or the World Bank's ongoing support to Tajikistan, the International Deve­lopment Association project, which was to finance the Communal Services Development Fund, was later cancelled upon request by the Tajiki Ministry of Finance in June 2015. This was due to changes in the International Development Association financing terms, which had been changed to 100 percent credit. Given this change, the Go­vernment became hesitant to borrow for the municipal sector.

Although the project for establishing the Communal Services Development Fund was even­tually can­celled, the insights and lessons learned during the study tour contributed to successful project preparation, negotiations, and subsequent approval of this project by the World Bank Board of Exe­cutive Directors on March 17, 2015.

Taken together, the implementation know-how learned, the experiences and skills gained, and the relationships forged during the knowledge exchange continue to inform the dialogue on a munici­pal financing mechanism in Tajikistan. There is a good likelihood that a municipal services project will follow or be revived, once internal govern­ment financial issues have been resolved.