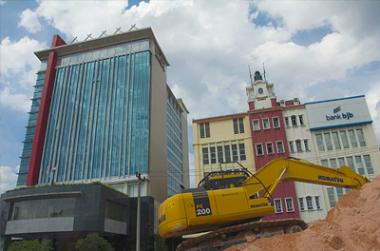 The Government of Indonesia acknowledged the need for supporting local governments on financing options for their infrastructure investments. The Ministry of Finance created a new unit on urban financing, while the National Planning Agency and the Ministry of Home Affairs also set priorities for supporting urban and metropolitan development. The Government of Indonesia needed to upgrade its capacity and know-how in designing and successfully implementing an urban development plan that would ensure the country was able to grow economically and deal with rapid urbanization. The Government began planning for the development of municipal development funds, called Regional Infrastructure Development (RID) Funds, that could provide funding and capital injections at the local level, while also holding local governments accountable and helping them reach predefined targets.

As part of this process, the Government needed to learn how other countries had implemented successful national urban development projects and managed RID Funds. In Indonesia particularly, there was a lack of effective policy instruments, absence of standards and formal incentives for private sector engagement, unclear guidance on roles and responsibilities of stakeholders, and no clear plans for effective management and monitoring and evaluation (M&E) of RID Fund implementation in order for it to be successful and contribute to national urban development.

The Government of Indonesia requested the World Bank’s assistance in arranging a knowledge exchange with Colombia. Colombia had demonstrated experience in designing and successfully implementing an effective national urban development program. Participating in the exchange from Indonesia were key government officials who would be directly involved in the technical design of the country’s urban development and urban policy and the RID Fund as well as in leadership and decision-making. This group included representatives of the National Planning Agency (BAPPENA), Ministry of Finance, Ministry of Home Affairs, and Ministry of Public Works. Providing knowledge in Colombia were representatives from the National Planning Department; the inter-sectoral Committee on Evaluation and Management for Results; and FINDETER, the development bank for sustainable infrastructure of Colombia.

The government representatives visited Colombia on February 23-27, 2015, for a program encompassing presentations and knowledge sharing with national government officials, followed by site visits to local governments and infrastructure projects. During the exchange, the government representatives split into two teams, one focused on learning about fiscal decentralization efforts in Colombia, and the other on municipal financing issues. The decentralization team met with the Ministry of Hacienda, National Planning Department, and local government officials in La Celera to better understand how they had developed fiscal discipline mechanisms that included an M&E framework and a reward-and-sanction mechanism for high- and low-performing local governments. They learned and observed how an M&E framework can be used to measure performance of local government transfers and, in turn, reward high performance and sanction low- or non-performing programs. Meanwhile, the municipal finance team met with FINDETER representatives to learn about its experiences as a second-tier financier, including security mechanisms, pricing, and setting up a municipal development fund to provide capital injections.

According to one program participant: “Learning from Colombia Government on how they structure fiscal discipline and set up an M&E framework is in line with the current plan for the Government of Indonesia on reforming the intergovernmental transfer system, to a more result-based approach.”

“The exchange provided us with very useful information on setting up municipal development funds. Currently, the Ministry of Finance is more confident on continuing to develop the RID Fund. The exchange was also useful for the Government of Indonesia on learning and sharing experience on the design of intergovernmental transfer system, especially on the monitoring and evaluation.” – Denny Kurniawan, Staff of DG Fiscal Balance, Ministry of Finance

According to one program participant: “Learning from FINDETER was a very useful experience, as the Minister has requested to move forward with the plan to develop the Regional Infrastructure Development Fund (RIDF) by September, 2015. The results from this knowledge exchange gives a very useful insight on how the Government of Indonesia should design the RIDF, including learning how they should set up the pricing, security mechanism, and PDF structure. The development of RIDF is one of the development goals of the Government and part of the Blueprint for Transformation Agenda under the Director General of Fiscal Balance.”

The exchange was financed by the South-South Knowledge Exchange (SSKE) Facility.

The Government of Indonesia has begun to use the lessons learned from their experience in Colombia to discuss and plan several options for moving forward on improving the fiscal decentralization agenda in Indonesia as it moves toward realization of its RID Fund. They are currently engaging in a series of participatory meetings and consultations with national-level stakeholders to build consensus on M&E design to ensure accurate indicators are developed and an integrated M&E plan is built. Likewise, the Government of Indonesia is planning improvements in the intergovernmental transfer system, moving it to a more performance-based system. Following lessons from this exchange, the Ministry of Finance is finalizing a Ministerial Decree for M&E of the intergovernmental transfer system and revising their regulations and policies on the intergovernmental transfer system.

Participants from Indonesia were: