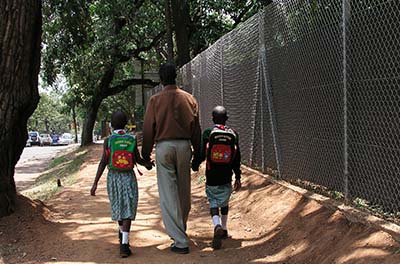 Development in Uganda, especially in the energy and mineral sectors, increasingly involves land acquisition and involuntary resettlement, which can lead to loss of assets and livelihoods.  The Ugandan Government had developed and approved a new land policy, but inadequate guidance on processes and procedures of resettlement led to inconsistent practices and standards across the country.  The Government, with support of the World Bank, sought to collaborate with the Ugandan Martyrs University (UMU) and other Ugandan universities to develop and offer courses on Management of Land Acquisition, Resettlement, and Rehabilitation (MLARR).  On the Bank’s recommendation, Ugandan officials visited Bangladesh to learn how to develop and implement MLARR curricula from BRAC University, which is a key center of excellence in involuntary resettlement in East Asia.
Two Ugandan officials and three UMU educators visited BRAC University in September 2011 to discuss the results of a market survey for MLARR courses, and to receive guidance on drafting a curriculum suitable to Uganda and other East African countries.  After this visit, the UMU established a longer-term partnership with BRAC University, which included BRAC experts’ visiting Kampala to offer guidance and trainings in MLARR, and partnering with Ugandan Christian University and Makerere University to guide them in developing MLARR courses. Ugandan universities launched a Community of Practice on MLARR, attracting over 200 members.
More than 300 officials from public and private sector institutions, non-governmental organizations (NGOs), and other groups from Uganda and East African countries have completed MLARR courses. Participants have praised the courses for their practical value.  John Sebuyira, from Uganda’s Ministry of Lands, said that his course was “an eye opener as far as implementing land acquisition projects . . . . Many times I read papers on how land acquisition has been mishandled . . . after the training we have been asked to come up with land acquisition guidelines . . . and I know what to do.”
The dialogue fostered by the exchange also contributed to the consortium of Ugandan universities becoming a center of excellence in involuntary resettlement for East Africa, and newfound knowledge has been applied to development projects. For example, Ugandan officials involved in transport and oil projects used their knowledge to improve social impact assessments, resettlement action plans, stakeholder consultations, and livelihood restoration programs. NGOs and project-affected peoples are more active in monitoring resettlement and demanding rights, such as the right to timely and adequate compensation.

Uganda is increasingly supporting projects in oil, minerals, and energy requiring land acquisition and involuntary resettlement, which can cause loss of assets and income for affected groups. The Government developed and approved a new land policy, but resettlement practices have been inconsistent due to inadequate guidance on procedures—though standards have been higher in projects supported by multilateral development banks. Ugandan officials, Bank staff, and academicians recognized a need to develop and share knowledge in land acquisition and resettlement serving practitioners in Uganda as well as other African states.
In response, the Bank organized a workshop in Kampala in 2010 to enhance awareness of good practices in resettlement for public officials, university lecturers, consultants, and representatives of the private sector and non-governmental associations (NGOs). Participants in this workshop agreed that the best way to disseminate know-how across Uganda and East Africa was for universities to develop and deliver courses and curricula on Management of Land Acquisition, Resettlement, and Rehabilitation (MLARR). The Uganda Martyrs University (UMU) volunteered to take the lead on developing courses and assisting other universities to do the same.  A senior Bank staff member, through connections made at a Bank activity, recommended that UMU learn from the BRAC University in Bangladesh, which is a center of excellence in East Asia and had a record of attracting students to its MLARR courses.  This exchange aimed to improve the capacity of Ugandan officials and UMU to develop and deliver MLARR curricula, develop partnerships to share UMU’s experiences with other universities, and provide feedback to the Government on what is or is not working to improve policies.

The exchange transformed the consortium of Ugandan universities into a regional center of excellence in MLARR, and has begun to improve resettlement practices in development projects. Recognizing the quality of Uganda’s courses, enrollees increasingly come from other countries.  On the recommendation of the World Bank and the African Development Bank, officials from Rwanda, Malawi, Zambia, Mozambique, Burundi, and Congo have enrolled in MLARR courses. Oil companies in Uganda have sent more than 30 staff members to attend courses. In addition, stakeholders have begun to use the new knowledge in projects supported by the Government and development partners.  An official from the Ugandan Roads Authority suggested that a course helped him to detail requirements for social impact assessments and resettlement action plans in transport projects.  A staff member from the Uganda Christian University indicated that she had applied course knowledge to better engage and consult with stakeholders in an oil extraction project.